“He looked around at the empty plaza again, feeling less desperate than before. This wasn’t a strange place; it was a new one…he had already traveled farther than any shepherd he knew. Oh, if they only knew how different things are just two hours by ship from where they are, he thought….As he mused about these things, he realized that he had to choose between thinking of himself as the poor victim of a thief and as an adventurer in quest of his treasure. “I’m an adventurer, looking for treasure,” he said to himself.”
-Paulo Coelho, The Alchemist 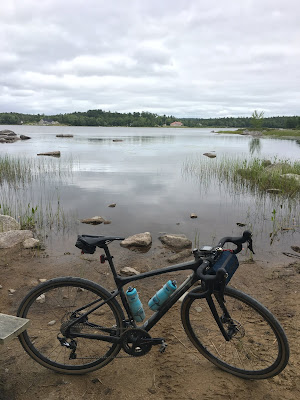 Inspiration.  It can’t be forced.  One can only let it surface.  As soon as I heard about the Rum Rummers trail in Nova Scotia last autumn, I was inspired.  Inspired by its reach.  Inspired by its adventure potential.  Inspired by the fact that it intersects the doorstep to Oak Island.  Inspired by its story.  I mean, bootlegging and secret buried treasures.  What else could one ask for in a gravel route?  I instantly knew that I absolutely needed to ride it.  The 119km shared use trail is built on a former rail bed.  The tale behind its name is that the railway was once used to transport barrels of liquor to be shipped from Canada to the “Rum Row” off the United States eastern seaboard on boats during the Prohibition-era from 1920 to 1933.   Local fishermen became international smugglers after they realized that they could make more money delivering a single load of booze compared to a full year of fishing.  The story fascinated me. The gravel lining of my soul had succumbed to the Rum Runners trail’s mythical lure. 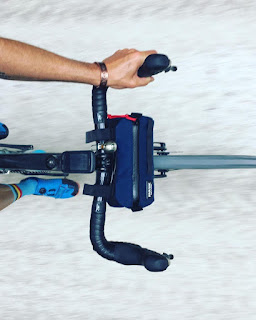 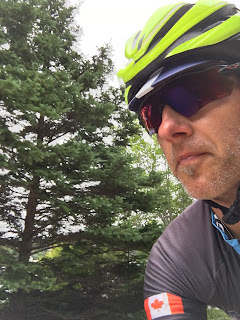 My inspiration gave birth to a list of rides that I wanted to do in 2019.  Writing them down on paper minimized the chance that they ended up on the “someday” list that lives inside my head.  Too many great rides have gone there to die.  It was time to stop murdering ride ideas that way.  The Rum Runners trail was the first one on my new list.  A solo day trip was how I wanted the adventure  to unfold, a sacred communion between me, my bike and the gravel.  The older I get, the more that I crave and enjoy the cleansing effect of companionless pedalling.  My riding is becoming my meditation, my experience best absorbed moving at my own pace, not distracted by small talk.  Isn’t it strange how age maturity brings us back to basics, back to simply doing what makes our soul sing. 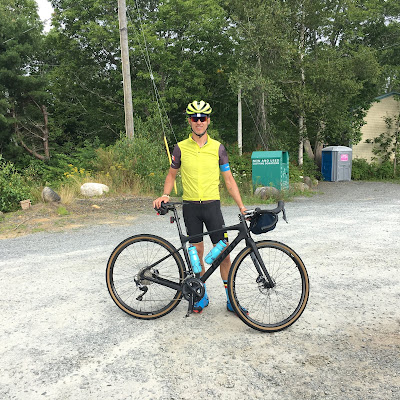 On August 7th, my wife and I drove to Lunenburg which is about 3 to 3.5 hours from where we live in New Brunswick.  We spent the rest of the day walking around, playing tourists.  The next morning, after leaving later than planned, my wife dropped me and my bike off in Mahone Bay.  I would miss the “Bay to Bay” section of the trail from Lunenburg, but would be less rushed to meet her in Halifax in time for supper.  She wished me luck before continuing her drive to Halifax and I started my ride.  My stoke level was that of a 10 year old on Christmas morning.  I had packed water, food, 3 tubes, 4 CO2 cartridges and tools to fix most everything that didn’t require a visit to a bike shop.  Once my wife left, I knew, and liked the idea really, that I was on my own.  I felt confident that I had everything that I needed.  Worse case, I had my credit card. 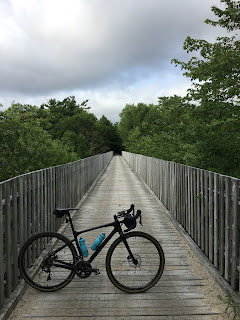 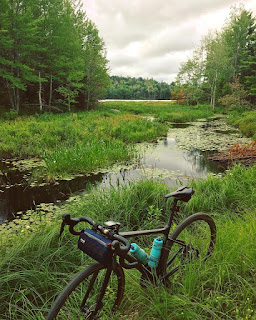 It was cloudy and a tad cool, but I quickly warmed up.  The dry and dusty sandstone gravel was whiter than I had imagined which made it almost feel like I was riding on Caribbean sand.  The “Dynamite” section out of Mahone Bay was absolutely gorgeous with its so very green, lily pad filled ponds and thick wooded sections.  I kept stopping to take it all in and snap photos, trying to find the right balance between experiencing and documenting my journey.  Some spots were so peaceful that I just wanted to sit there and nature bathe forever.  The serenity and peace of mind knowing that you’re not riding amongst car traffic really make up for the gentle trail grades and generally easy ride.  Rolling in and out of the many wooded sections, I was always excited to ride through the coastal communities that the trail crosses. 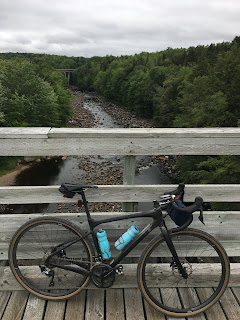 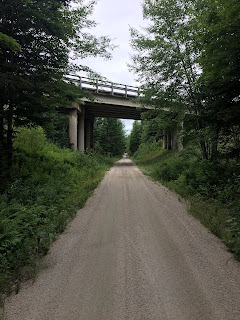 I stopped to chat with an older couple walking on the trail near Martins Point.  They seemed quite surprised, concerned even when I told them that I was riding to Halifax.  They looked at me like I was insane and asked me if I had brought water.  I assured them that I had all that I needed and that I was good.  I asked them how far we were from Oak Island.  They told me that it was just ahead, a few kilometers off the trail.  I don’t really watch “The Curse of Oak Island” on the History channel, but I still felt intrigued by the legend of its lost treasures.  I had to stop to have a peek, even for just a few minutes.  I missed the road that leads to it, so I had to backtrack a bit, but I eventually found it.  The first impression that I got was how small the island actually is.  There isn’t even a bridge to get to it.  They just built a dirt road that connects it to the mainland.  The second impression is that it is very guarded.  The general public is not allowed anywhere other than around the interpretive centre unless on a paid guided tour.  There was a sign warning me that I may be filmed if I decided to enter the area.  I never saw any cameras.  I never saw any treasures either.  I ate a snack, took a few pictures and bathed in the island’s energy before heading back to the trail. 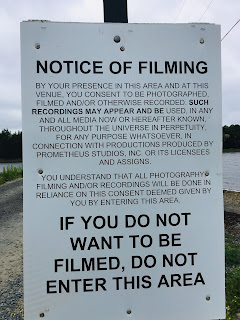 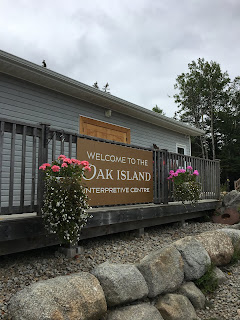 Back on the “Chester Connection” section of the trail, I pictured myself a passenger on one of the many trains that had travelled the same journey way back when.  I imagined how it must have felt for them to be in the exact same location but sitting in a train cart taking in the scenery rather than outside on a bike.  I wondered what they were thinking at the time.  I wondered what they talked about.  I wondered how they felt as I approached one of the old train stations.  It has been transformed into a very quaint visitor information centre and craft shop.  I imagined passengers hoping on and off the train at this station back in the day.  The rich history of the area made my imagination wander, keeping me entertained during the entire ride. 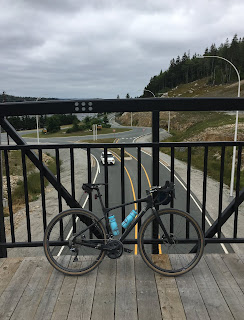 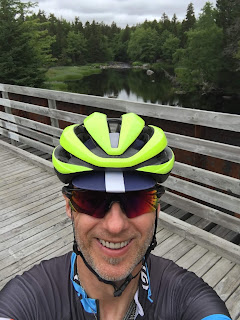 Cruising on the “St. Margaret’s Bay” section of the trail, I felt so very tall looking down at the roofs of the houses below as my tubeless 40mm tires floated over the gravel surface carved into the rocky hills along the shore.  This made me think about the amount of work that went into building the initial railway.  The task is so very impressive, especially back when modern machinery wasn’t as available as it is today.  I felt that those who built it would have been very happy to know that all of their work did not go to waste.  They would certainly be proud that their railway has been born again as an amazing trail system and that it is still used today.  Even the bridges are built on some of the original metal and preserved wood structure.  This re-purposing  made me crack a deep smile. 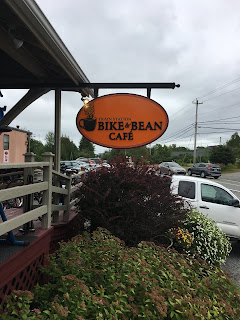 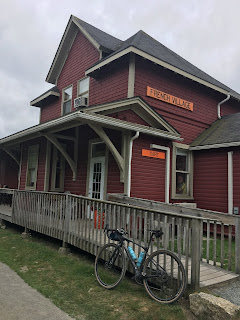 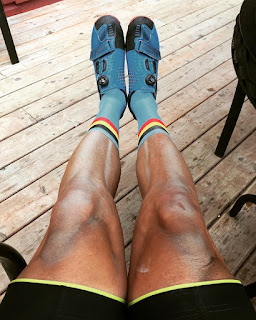 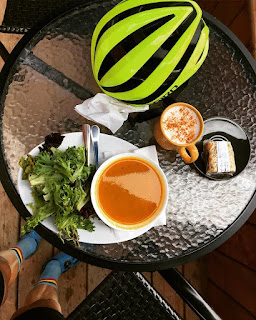 Still on the “St. Margaret’s Bay” section and starting to feel the bonk, I wondered how far I was from the coffee shop.  My gaze, brushing the brim of my cycling cap, caught a glimpse of a barn red structure ahead.  It was another old train station, which is now the Bike and Bean Café and Bike Shop in Upper Tantallon.  The place has so much charm.  The main building is attached to an old railroad car that they use for bike storage.  And that soup, salad, dessert and latte sure tasted like a million bucks after 4 hours of spinning the pedals stirring white gravel gold dust.  I met a few other cyclists and chatted with the owner before heading back out for the final stretch of my voyage.  I started feeling rain drops just as I rolled into Halifax.  Perfect timing.  No flats or mechanicals.  An amazing ride that I will certainly not soon forget.  The day was capped off with supper with my wife and her nephews at The Wooden Monkey restaurant in Halifax as I basked in the after-ride stoke. 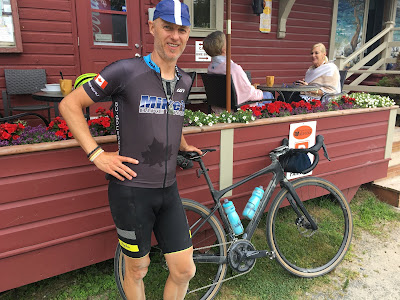 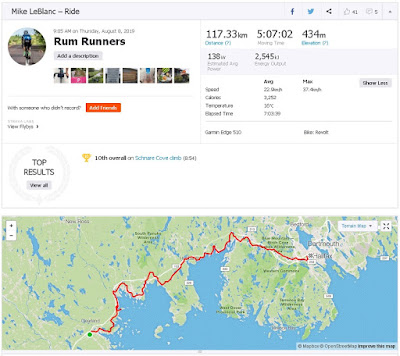 Oh, and what about the other items on my 2019 ride list?  There certainly were some other outstanding gravel adventures in there as well.  Like the day that I got lost on purpose exploring the open spaces between New Brunswick and Nova Scotia.  It was one of those perfect July mornings where the green is so very green and you can taste the thickness of the warm air.  I wasn’t going fast, but the riding felt effortless.  It was like there was no wind even if I felt refreshed by a gentle cool breeze.  And there was also the day that I finally did the Dorchester Cape loop.  I had stopped in Johnson’s Mills for a quick snack just as I noticed the Sand Pipers dancing along the shore.  The beauty of how they were moving literally gave me goosebumps.  Yeah, those were amazingly great ride days as well. 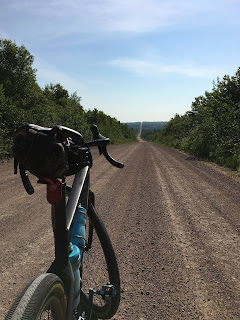 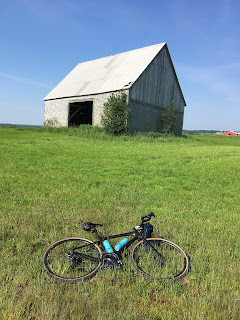 We are sold the idea that the most beautiful places on this earth worth seeing are far away and expensive to visit.  But this way of thinking only makes us miss what’s right under our noses.  It makes us miss the treasures in our own neck of the woods.  Who knew that all this amazing gravel existed so close to home, just waiting to be ridden?   As much as the big bucket list ride destinations seem exciting and worth doing, I believe that we should all start with exploring where we already are, in our own backyards. 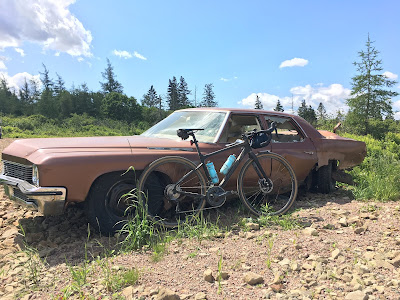 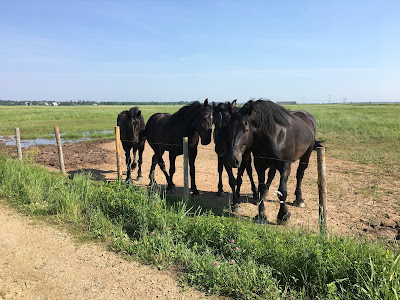 I got through most of my 2019 ride list.  And those that I haven’t had the chance to ride yet, they may happen this fall?  If not, they’ll just be at the top of my 2020 list.  Maybe 2020 will the year of my first multi-day solo backpacking trip?  Maybe?  Inspiration.  It can’t be forced.  One can only let it surface. 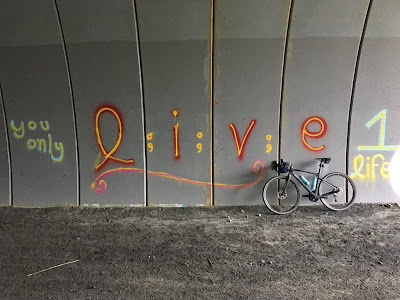