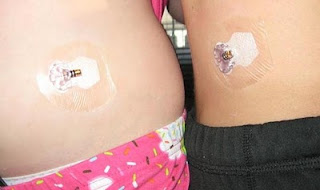 It's been a while... I usually try to update my blog once a week, but have not been too good in that sense lately. I missed blog week last week as well. So, what's my excuse? No excuses. Basically life and Type 1 gaming. So, it's time to get back on track with a new post...
After supper the other night Adele wanted to remove her Continuous Glucose Monitor (CGM) sensor. It was 5 days old, which means that we could still get another day out of it. And it was working really, really good. The numbers were really close to her meter readings. But it had started to come out after swimming so I had to do a slight "patch job" with an Opsite dressing (thin "sticker" that we use to keep CGM sensors and pump infusion sets from pullling out). This patch job made the skin not breathe very well and it was getting quite itchy. I told her to keep it on since it was working so well. She then told me "You don't know what it's like to have Diabetes and to have this sensor and infusion set stuck to your skin all of the time". Crap, it's so true. I don't know. I don't even have a clue what it's feels like to be in Adele's shoes.

A few hours later, after I finished my bike ride, Adele told me that she had removed her CGM sensor, that she couldn't stand it anymore, it was just too itchy. She felt like she needed to justify that she took the sensor out. When I was tucking her into bed, I told her that I wasn't mad at her because she had removed it and that she was right, I don't have a clue what it's like to have Type 1. Then she challenged me to insert and wear a CGM sensor for 6 days to see what it feels like, to experience that "itchy" feeling. I told her that I would if I could, but that sensors were too expensive to "waste" one. Then it hit me. We had a few expired sensors left from the last box. I told her that next time that she inserted a sensor that I would insert one as well. Mine would not work without a transmitter or a pump to display the numbers, but at least I would somewhat know what it feels like to have a small wire splintered into my skin as well as an Opsite dressing covering it all and holding it in place.
As a bike racer, I remember being frustrated a few years back after repeatedly being beaten by a fellow competitor. He was my age, also had a full-time job, family and no matter how hard I trained, I just couldn't seem to beat him. I told myself that he was just genetically gifted, a freak of nature really and that's why I couldn't keep up with him no matter what I did. I told myself that he just had better genes. But then, a friend told me that the reason why I couldn't beat him wasn't that he was physically stronger than me due to genetics, but rather that he could suffer more than I could. Hmmmm... At first I thought that was absurd, that it couldn't be that simple. "I can suffer with the best of them" is what I thought. But maybe he was right. Maybe I was giving up unconsciously to avoid feeling that extra level of pain and discomfort? Maybe I was losing because I was just too 'soft'?
My first sensor insertion seems to support this 'softness' theory and strongly suggests that I really am a wuss, a coward, a big chicken and a wimp. Looking at that long needle made me want to back out of my commitement, but I knew that once I told Adele that I was going to do it that there was no backing out. I can't deny that I was afraid. I used the skin numbing emla cream. Luckily this wasn't against the rules since Adele also insists on using it for her sensor insertions also. I inserted her sensor and she pushed the button to insert mine. I was trying to be as brave as her, but deep inside I braced myself for the pain. The needle seemed huge (it actually is huge!). Luckily with the numbed skin I didn't really feel a thing during the insertion. It certainly didn't hurt. We secured everything in place with the Opsite dressings. Adele started CGMing and I started pretending to CGM. The next few days, Adele kept asking me how my sensor was holding up and I kept an eye on hers. After 4 days, hers started to give bad readings, we tried to recalibrate to make it work, but with no luck after numerous attempts we decided that Adele could remove it. I wanted to try to keep mine in for the full 6 days, but as soon as Adele removed hers, she also pulled mine off. I guess she wanted to give me the same type of relief that she had just experienced by taking hers off and finally letting the skin breath and begin to heal.
I'm happy to have done this and hopefully it helped make Adele feel supported and that I was at least trying to understand what it's like to be in her shoes. So many times have I wished that I could transfer Diabetes onto myself instead of her. It made me feel a bit closer to her every time I'd notice the sensor just above my belt. I forgot about it many times when I was out and about. I even almost accidentally tore it off while showering, but it was still always there. And it started to itch after a day. I could usually get busy doing something else to help me forget about the itchyness, but I could still feel this thing that didn't really belong and that my body didn't really like being there. The skin even remained itchy and irritated 3 or 4 days after the sensor was removed. It also made me feel bad in that this isn't an experiment for Adele, it's her reality. Yeah, sure we could get her off of the pump / CGM and go back to multiple daily injections, but that option doesn't seem much more appealing. As helpful as all of these new technologies are in regards to Type 1 gaming, they are in NO WAY close to a cure. They keep Type 1 gamers alive... and make pharmaceutical companies richer and richer (sorry, I just had to add that last part).
So now when I see the wheel in front of me pulling away during a bike race when my legs and whole body are screaming in pain, I think of Adele and of all that she must go through each and every day and I suck it up and pedal a little harder. I choose to push deeper into the pain. At least I have that choice...
Posted by Mike LeBlanc at 10:27 PM 8 comments: 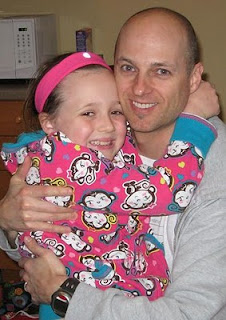 I still seem to be going through a certain mourning. After 7 and a half years I should be over it right? That's what people keep telling me. That and it's not cancer. I really appreciate the thought and feel very lucky that it isn't cancer and that we get to keep Adele for now, but it still is Type 1 Diabetes and unless you're a fellow Type 1 gamer or you've lived in our shoes you have no idea what it's like.

Going through the day to day motions of constant monitoring, counting, calculating, bolusing, testing, guesstimating, not sleeping through the night... now seems somewhat normal. We've become very good at making it seem like we have everything under control at all times which is really not the case. Experienced Type 1 gamers are very good at creating the appearance of health and being normal. And no one really wants to hear about it all after a while. They just want to move on. For us, that old news isn't going away anytime soon. It's in our face 24/7.
So, we seem to have the day to day details dailed in for now. What about the future? I've been thinking about Adele's life when she grows up as a Type 1 diabetic. How will she deal with all of this extra day to day Type 1 work on top of everything else that she'll need to do like work, meeting deadlines, career, family...? At 22 years old, she'll already have 20 years of Type 1 Diabetes. Each and every day of Type 1 gaming takes it's toll on the player's health. You have an organ that no longer works, so the game consists of trying your best to do the job that the organ (pancreas) once did. Artificial organ functionality is never as good as the real thing. Each minute that blood sugar is out of range brings us one step closer to complications. Insulin, along with all of the latest available technology, is not a cure, it's life-support.
We have never really sat Adele down and explained to her the possible complications that she may face in her future. But, she's caught on that playing the Type 1 game is not just about needles. She seems to have figured out that it goes beyond that. She really wants a family when she grows up and asked us the other week if having Diabetes could prevent her from having children. Then, as she was testing her blood sugar a few days later she told me that she's sometimes afraid that she won't have any blood left in her fingers and that she won't be able to test. This week she told me she is sometimes afraid that she'll go really low and will die. We reassure her when she has thoughts and questions like these, but she surely still feels our worry. But, she's a kid, so a few minutes later she's already forgotten about the whole thing and is busy thinking about what she'd like to play next. She has presence. She lives in the moment. She lives in the now. Having observed this, I challenged myself to be more like her, to try to live more in the moment. It's strange, but this seemingly simple decision prompted an entire shift in my mood. Instead of my mindset being 10+ years in the future or a few years in the past, I concentrated on NOW. That night, I tested Adele while she was sleeping and her blood glucose was good. I knew that for now she was okay. I took a few minutes to cherish and take in that feeling of okayness. I appreciated the moment. When you think about it, the now is the only thing that is a sure thing. The nature of the Type 1 game makes it very difficult to live in the now since the objective is to look at where the numbers are, have been and then try to predict where they're going. Not exactly living in the moment... But I think that it's still important to be conscious of exactly where we're at and to try to maximize our time in the Now dimension and be more at peace.
So that's my new challenge, to develop a new habit of 'just being' more often... I invite you to give it a try as well... and let me know how it works out.