Pretty sure I was about 4 years old when I learned to ride a 2-wheel bike.  Back when bike helmets didn’t exist.  I remember when I was 17 years old and we built a ramp to jump over a car.  We worried about how to get enough speed before hitting the ramp to be able to make the gap.  But it never occurred to us that it would be a good idea to wear a helmet. 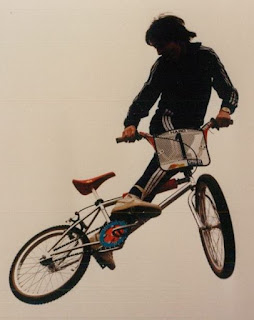 I got my first road bike in the late eighties but purchased my first helmet in the 90s only because I needed one to do my first mountain bike race.  As I got older, I evenually always rode with my helmet.  It has become as automatic as buckling my seatbelt as soon as I sit in a car.  I feel naked without it.  Lately, I have become quite paranoid about road riding given the drivers using their cell phones.  Because of this, I seemed to favor mountain biking since I trusted my skills much more than the drivers with which I shared the road when out on my road bike.

On July 5th, at the last race of the 8 week Hub City Challenge mountain bike series at Rotary Park, my mountain bike skills that I had such confidence in failed me.  Going down a rooty downhill that I had ridden literally hundreds of times, I lost focus for a fraction of a second and went down.   No other riders around me.  The trails were dry.  I knew in the air that the crash was going to hurt, then remember thinking “Wow my head hit the ground really HARD!”  I rolled out of it like they teach in the Sprockids program, but was seeing all sorts of stars after trashing my helmet.  I remember everything and never lost consciousness, but immediately knew that I had suffered a concussion.  I picked myself and the bike up and walked back to the start finish area and sat down.  I felt better after a bit.  After talking to a few people, I rode back home, told my wife, cleaned up and went to bed.  I thought about going to the ER, but Google was telling me that I only needed to go if I lost consciousness and/or felt nauseous.  I just felt very spaced-out / stoned.  I figured it was like when I’d get slammed into the boards as a teenager playing hockey and that it’d be better the next day.   It’s all part of bike racing right?

Unlike when I was a teenager playing hockey, I’m not 15 years old anymore.  I didn’t feel better the next day.  After symptoms were getting worse on the 5th day, I decided to seek medical advice / treatment.  They told me that yes, I had suffered a concussion, that an MRI wasn’t really necessary since it had not just happened and that I just needed to take it easy and rest.  Lying alone the next day in a dark hotel room in Halifax on our first day of summer vacation while my family was out enjoying supper, I didn’t feel very proud of what I had done to myself during a supposedly fun local mountain bike race.  I felt guilty for ruining our vacation and being a burden to the rest of the family.  This guilt and regret was on top of physically feeling worse than I have ever felt before.  I was suffering and completely miserable.  When your brain is injured, it pretty much affects every single thing that you do except for maybe sleeping.  I felt so vulnerable and out-of-control.  I also felt depressed, anxious, broken and afraid.  What if I don’t fully recover?  I desperately just wanted to feel normal again…

It’s been over 5 weeks since the crash and I’m much better, but still not 100%.  My balance is still off and I tire much more easily, but I now see light at the end of the tunnel.  I feel optimistic and expect a full recovery.  But where do I go from here?  Do I just treat this as an “accident”, a random occurence and continue living like it never happened?   Was this just bad luck or is there something to be learned?

Since last year, I have been trying to look at my time here on earth as being enrolled in a school.  I’ll call it “life-school”.  Everyone is enrolled in different courses based on what we need to learn during our time here.  When we fail a course, we must take it again (and again and again if necessary) until we pass and learn what it is meant to teach us.  We often fail our courses either because we aren't paying attention or when we're too busy looking at what others are doing with their lives, but this doesn’t work because others are most likely not enrolled in the same courses as us.

So based on my life-school theory, what am I supposed to learn from this in order to move onto the next life-course?  The answer to this question must come from within…  In the last 1.5 years, I have had health issues that have affected my heart and my brain, arguably the 2 MOST important organs in the human body.  That’s pretty scary shit right there.  Both issues have also prevented me from racing bikes.

If I am honest with myself, I know deep-down that my competitive racing days are over.  Not that I ever reached a true “elite” level in the sport, but I have invested a LOT of time and energy in trying to go faster and improve my race results.  This year, I started the season with the intention to only race “for fun”, but once I began to gain more fitness and was able to push myself more, my psyche went back into full race mode and I became a danger to myself.  The Pericarditis, which to be honest was really just a symptom of Diabetes burnout, has affected my ability to focus which is necessary in bike racing.  When speed surpasses your ability to focus, your timing is off and when you’re pushing your limits, being off by even just a fraction of a second is the different between nailing a fast section and becoming a helmet tester.

My family needs me healthy.  I have responsibilities including care for a chronically ill teenager.  As Adele’s main Type 1 Diabetes caregiver, I really need a fully functional brain in order to be able to help her manage her blood sugar levels as best as possible.  I certainly don’t want to risk another head injury.  So for these reasons I have chosen health over my bike-racing passion.  I am officially retiring from all bicycle racing at the moment.

Why am I making this announcement here on this blog?  The first reason is to explain to my friends in the cycling community why I will not be attending their events.  I love to support those who support our beautiful sport, but right now I cannot support your competitive events with my participation.   Sorry.  The second reason is that I really don’t trust myself.  Like the alcoholic who thinks he can have just the one drink or the ex-smoker who thinks he can just smoke the one cigarette, I need something in writing (a contract !!) to remind me of my decision and why.  Like the broken helmet sitting on the shelf in my basement that will stay there as a reminder, I cannot forget that I am breakable.

I still intend to continue riding for fun and would still like to support and participate in non-competitive cycling events like grand fondos and charity rides.  Heading into the fall season, I know that Cyclocross racing is the discipline that I will miss the most.  It is also likely one of the least dangerous given that speeds are lower and courses are mostly on grass, but I am still not willing to risk it…  Not this year for sure…  Damn short attention span and addictive personality…
Posted by Mike LeBlanc at 3:26 PM 1 comment: