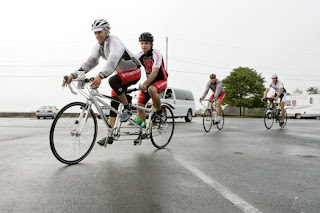 Hurricane Bill hadn't yet started as we dipped the wheels of the Norco tandem we baptized Diabetsy into the waters of Halifax's Point Pleasant park.  It was cloudy, mild but no rain yet as we prepared to head out at 6 am that late August Saturday morning.  The ride that was about to begin was the first edition of the Cyclebetes national relay.  The year was 2009.

I was the first on the tandem that foggy morning and my stoker was Alex Bates.  I knew of him before, but had technically really only met him the day before at the hotel in Halifax.  The very first thing that I noticed with Alex was his upbeat, always happy attitude.  He was excited about the adventure that we were about to embark on and so was I.  His passion for life was contagious and I couldn't help but think that it always seemed that he was living on borrowed time.  Once I began to know him, I realized that he actually was.  We hit it off immediately given our shared passion for mountain biking and there was also the Type 1 Diabetes connection.  Alex was diagnosed shortly after birth and he had really struggled with it.  He had endured eye surgeries and was on dialysis in his early 20s.  It didn't take long to realize that this dude was tougher than I'll ever be.

His enthusiasm on the bike was evident, especially in the force with which he pushed on the pedals.  It almost felt like someone was pushing us from behind on the tandem.  It was a pleasure riding with him feeling like it really was a team effort.  Even with his young age of only 25 years, it felt like I was talking to someone much, much older than me.  He was noticeably wise well beyond his years.

I remember him talking about his kidney / pancreas transplant that he had undergone a few years back and how it had literally given him his life back.  He no longer needed to be on dialysis and the insulin producing islets in his new pancreas were also fully functional maintaining normal blood glucose.  He told me that for him it was as if he had been cured even if he now needed to take very strong immunosuppressant drugs to avoid organ rejection.  I can't quite describe how excited and alive he looked when he was telling me that.  I will never forget that.  It truly was incredible.

Last Sunday, Alex Bates passed away accidentally in a motor vehicle accident while riding his motorcycle, doing what he truly loved.  In the end, it wasn't his Diabetes that took him away like I'm sure so many thought would.  I can't help but think of the role that JDRF research played in making the last 5 or so years of his life quite possibly his best. Without JDRF funded research, his pancreas transplant would simply not have been possible.  It's very comforting to know that the money that I have raised for JDRF has literally enhanced treatments for Type 1 diabetics like Alex and so many others.  I've often thought about it, but I can't really imagine how we're all going to feel once the "real" cure happens.

On Saturday, September 7th, I will be riding my bike 200 kms in honor of Alex Bates feeling grateful to have spent those 4 days with him during the 2009 Cyclebetes relay ride from Halifax to Quebec.
Please support me if you can...

Thank you
Mike LeBlanc
Posted by Mike LeBlanc at 8:45 PM No comments: 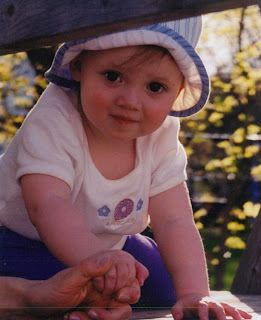 With the Mike’s Bike Shop Cyclebetes 200 ride to cure Type 1 Diabetes just around the corner and lots of new faces beginning to sign up and fundraise, I feel the need to tell our story.  If your life has also been touched by Type 1 Diabetes, I’m sure you can relate since your story is surely similar to ours…

In the fall of 2002, Adele started showing signs that something wasn’t quite right.  At such a young age, she couldn’t tell us how she was feeling, but her unquenchable thirst and frequent high volume urination could no longer be ignored.  On Halloween night we got the diagnosis – Type 1 or Juvenile Diabetes, an unpreventable, chronic disease caused by a malfunctioning immune system that mistakenly destroys the body’s ability to produce a hormone called insulin as well as the body’s ability to manage blood glucose concentration in the bloodstream.

The doctor explained to us that the treatment is lifelong insulin therapy without which Adele would die.  All Type 1’s must inject or infuse insulin to stay alive.  Insulin cannot be administered orally.  Type 1 or Juvenile Diabetes cannot be reversed or cured.  Insulin is not a cure.  It simply prevents extreme hyperglycemia and ketoacidosis which eventually causes death in a matter of days.  Insulin does not prevent long term complications.

For at least the first year, it took at least 2 adults to give Adele her injections, one to hold her still while she kicked, cried and screamed and the other to administer the injection.  At the time of diagnosis, we couldn’t leave the hospital before both my wife and I were comfortable giving the injections.  It took almost an entire week to be able to find the courage to shove that needle into our baby, but in the end we just wanted to go home.  I think each injection hurt us more than it did Adele.

We’ve come a long way since that day in 2002, but we’re still a long way from how it was before the diagnosis.  Adele needs to constantly monitor her blood sugar levels.  And by constantly, I mean pretty much hourly every single day including her birthday, Christmas… and even through the night.  The thing is that almost everything affects blood sugar including stress, fatigue, excitement, a virus, exercise…etc…  It’s not just food intake, it’s also pretty much everything else as well.  A non-diabetic’s body is constantly making tiny adjustments to maintain blood sugar between normal levels.  For a Type 1 diabetic, these adjustments need to be made manually by the diabetic or the caregiver.  All this work and you can still never keep blood glucose values in the normal range at ALL times.  It’s just not humanly possible.

Posted by Mike LeBlanc at 4:08 PM No comments:

I really enjoy blogging, but lately the time and energy to do so seem to be slipping away... 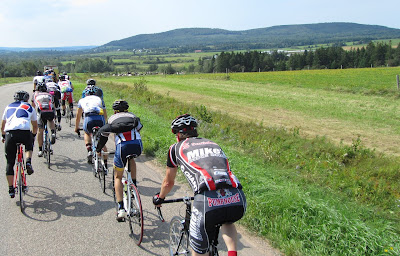 During a bike race or a group ride, you’re sitting comfortably in the pack.  The pace is not easy, but you seem to have managed to hide enough from the wind, following the best wheels to make it seem that way.  You struggle a tad up the hills, but when the road levels out again, you’re able to recover and maintain contact with the pack.  The illusion created makes you feel like you can keep this up for the entire duration of the ride or race.  The level of suffering is bearable and almost seems normal after a while.  The legs seem to spin the pedals automatically until they suddenly don’t.  You try to concentrate harder on the task at hand, you dig deeper to try to hang on, but deep down you know your time has come.  You’ve been dropped.  You look up to see the rest of the pack ride away.  They’re not attacking, the pace hasn’t changed, it’s simply your legs that have reached their limit.  You’re done.  I mean, you can still ride, just much slower now.  If you’re a cyclist, you know the feeling.  Complete exhaustion.  You try to eat or take a drink of water to turn things around, but the feeling can’t be fixed.  The only thing to do is finish the ride or race at your own crawling pace.
After our Type 1 odometer rolled over the 10 year mark last fall, that’s basically how I have been feeling.  In this Type 1 game race, I’ve been dropped.  The energy and enthusiasm that I once put into Type 1 awareness and fundraising just doesn’t seem to be there anymore.  The effort turned out to be unsustainable after a while.  I really don’t like it, but it’s still how it is.  In the end, the legs (or body) have the final say in getting dropped even when the mind is still committed to hanging on.
So that’s where we’re at.  I understand that we still mostly don’t really know what we’re doing even if by now we know exactly what we need to do.  We have also learned that textbook Type 1 math is always a simplified version of it’s practical application.  The goal is always independence.  Adolescence, a first step towards this goal has given us more breathing room, but also more time and things to worry about.
Type 1 gaming is so much more than needles and numbers.  The psychological aspect of Type 1 gaming is likely the biggest part even if it is sadly the most overlooked.
On Saturday, September 7th, I will again be riding my bike 200 kms during the 6th annual Mike's Bike Shop Cyclebetes Ride to Cure Type 1 Diabetes.  If you can, please help us reach our goal of $20,000 raised for Juvenile or Type 1 Diabetes research by clicking the Support me! button on the page below and making a pledge.


Posted by Mike LeBlanc at 1:08 PM No comments: