The business of broken body parts... 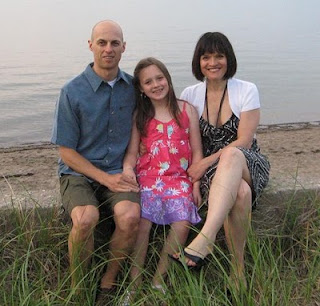 A few weeks ago, Adele started to be very insulin resistant for some reason. I'm still not sure if it was the heat / humidity, fatigue, pre-pubescent hormones, a virus or the fact that she's grown quite a bit in the last few months, but changes made to her basals and meal/snack ratios seem to have brought things back under control. Times like those are scary and they remind us that things can turn bad very, very quick while playing the Type 1 game. We convince ourselves that we're in control but in reality we're not at all. It's like walking on the yellow centre line of a major highway. Even if you're extremely cautious, the risk of getting hit is still very high.
This post has been in draft for a few weeks now (ok, more like a whole month) so the topic is not so recent, but the message is still worth sharing. Last month was the JDRF walk to cure Type 1 Diabetes. The weather was great and I think that it's the year that Adele had the most fun with her friends and family walking and then playing in the inflatable play park. This is our 8th year participating in the walk. You can usually recognize the new Type 1 gamers at the walk. They often have lots of enthusiasm and hope. Being newer to the Type 1 game, maybe they haven't fully accepted the life sentence and see it as a "temporary" condition since we're supposedly very "close to a cure". The veteran gamers participate in the walk as well but they almost seem to have lost a bit of that enthusiasm. Maybe it's truly accepting the Type 1 sentence or it's just that they're so tired from the 24/7 gaming. They may simply be burnt out? I'm not really sure where we're at in this categorization. I truly believe that a cure is possible but also aware that it's not as simple as I once thought it was. Sadly, everyone except for the Type 1 gamers themselves and their loved ones are only interested in a cure for Type 1 if there's still money to be made. It's a business and very sad to be taken advantage of like that, but that's how it is. Diabetes is part of the sickness business where there are lots of people raking in the big bucks. At least with JDRF, I believe that they have the Type 1 gamers best interest at heart and that they're trying to do everything that they can to accelerate a cure. But, on the other hand, too many people simply put the dollar ahead of human wellness.

So, given this realization, do we still talk about a cure with Adele and hope that one day she will be free of this never-ending 24/7 struggle? Yes, we sure do. We don't tell her that someday she WILL be cured, but we tell her that it is our duty as gamers to do as much as we can to help make this happen. We want her to have confidence in the universe instead of being depressed and negative about her state. We talk about what we'd do if or when she's cured. We talk about how we'd celebrate and go on a dream vacation. She knows that it certainly won't happen tomorrow or maybe not even in her lifetime, but she still gets excited about it. Without this dream, all hope is lost. Yeah, we're definitely tired and we now realize that a cure is much more complicated than we once thought it was or that many often make it seem, but damnit we're not giving up, trying our best to enjoy the NOW and taking our responsibility as Type 1 gamers to raise awareness and support JDRF's dedication for a cure.

One thing that I thought of and appreciated at the walk was the feeling of normalacy with testing Adele's blood sugar in public. It feels good to be able to stop and test amongst people who get it. No one looks at you wondering what you're doing and Adele doesn't feel as self-consious since she is now the norm. Feeling understood is a good feeling. Talking to the father of a young Type 1 gamer, he told my wife that his daughter had just started playing soccer. He's at each and every one of her games, but he's really never seen her play. We understood exactly what he meant, but non-gamers may not get it. You see, the entire time that he is standing on the side of the soccer field he is wondering and worrying about her blood sugar level. He's looking at her face for signs of hypoglycemia, he's doing math in his head trying to predict when her insulin is going to peak, he's trying to convince himself that she's okay. I know exactly the feeling since I've also lived it many, many times. Others see a young girl having fun playing soccer while her Diabetes caregiver sees numbers. It's a constant struggle that is difficult to grasp unless you've lived it. People try to understand and be nice by asking how her control is and making assumptions that because we've been doing this for many years now that her "numbers have stabilised". We only wish...
Posted by Mike LeBlanc at 3:43 PM 8 comments: