The past few days had been good. So good, that I caught myself saying to myself that playing the Type 1 game ain't so bad. Now, I've been playing this game long enough to know that I shouldn't be telling myself such things since it is always followed by a reminder of how difficult a game this can be.
This last Continuous Glucose Monitoring (CGM) sensor has been working very well. We even got an exact match in readings when we calibrated on Wednesday morning. Adele was all excited that both the CGM and her meter returned the exact same blood glucose value. We even took a picture.
Today, the morning started with a low (3.7). Her CGM said 5.0, a bit off, but not too bad. I backed off Adele's breakfast insulin bolus since she was swimming at 10am. She went up to 9.0 before starting to come back down before leaving for the pool. She ate a snack and I didn't bolus. She was 8.9 before getting into the pool. Since her breakfast bolus (1.4 units) had not yet peaked and that she was on her own during her 1 hour swimming lesson, I gave her 1 Dex tablet (4g carbs) just to make sure. She was 12.1 after her swimming. Less snack (or a bit of insulin) would have been best, but that's the way it goes sometimes. I gave 0.8 units insulin to bring this down.
After swimming, we went to the market and she ate a sorbet followed by her lunch. Less than 1 hour after lunch, she's already low (3.7). I turn off her pump for 1 hour and give her juice and crackers. 1 hour later she's just 4.2, so she eats a few more crackers and her pump is turned off for another hour. She's low and just can't seem to go up. A few hours later, before supper, her sugar is 8.3. One hour after supper her pump says 5.6 with 2 down arrows which means she's dropping fast (likely already in the 4s or 3s). She was very, very sensitive to insulin which was causing her sugar to drop all afternoon.... Until tonight.... I backed off insulin to cover her evening snack since she was so low all afternoon. But then, suddenly things flipped and she became very, very resistant to insulin. Her sugar climbed to 17.5 before she went to bed, I correct with 0.6 units. One hour later, she went up to 18.9. Arrrrgh !!!!! I corrected again with 1.0 units. Will it be enough or too much? Who knows? It's just another day playing the T1 game.
Posted by Mike LeBlanc at 9:59 PM No comments:

Which dog am I feeding? 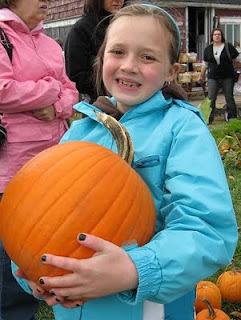 I can't believe that we're already in mid October! We were in August and then BAM, we're past Thankgiving weekend and looking for tuques and gloves. The school routine is now in full swing. I talk to Adele's teacher's aid several times during the day. She tells me Adele's sugars and I tell her how much insulin she needs to take or if she needs extra snacks. Then, every weeknight, there's homework and the infamous "preparing the next day's lunch" task. Adele needs to bring her own lunch because of her Celiac disease (wheat gluten intolerance) and we also need to calculate the carbohydrate content of everything in her lunch bag in order to be able to calculate how much insulin we think she needs after eating. This task is not the most popular at our household, but it needs to be done.

Adele has been wearing the Continuous Glucose Monitor now pretty much every day. She actually prefers to have it on since it makes monitoring her sugar at school much easier. She doesn't need to stop doing what she's doing for a finger prick. She just glances at her pump whenever her teacher's aid asks her what her sugar is. Like I've mentioned in previous posts, it is not always easy to calibrate, but we love it when it is working correctly.
Last Saturday, after getting back from the market, Adele said she felt low. She had eaten a sorbet (quick sugar) and we had guessed the carb count. Her pump said she was 5.2. We always test if she says she's feeling low. The finger prick gave us 2.4! She ate some much needed sugar and we re-calibrated the Continuous Glucose Monitor (CGM). The rest of the weekend was lots of ups and downs. CGM showed that her sugar was trending down Sunday afternoon before picking apples, so I turned the pump off for a short while which seemed to fix the problem. Her sugar had stabilised before supper, but then started to shoot up in the evening after our Thanksgiving feast at my parents. It went as high as 19.0 and had a hard time coming down even after double correcting. Holiday Monday was the same, lots of ups and downs. I find that her sugars are usually more stable during the week when she's at school since she is on a fixed schedule. This is normal and just a reality of the Type 1 game.
This past weekend, we were on a CGM vacation. Her last sensor wasn't working properly at the end of the week. It kept on giving false readings, so we took it out. The CGM alarm kept going off indicating that Adele was low and we'd do a test with her meter and she wasn't. We didn't have time to put a new one in, so we're back to old school finger pricks for a few days. Yesterday, we went to Camp Wildwood near Bouctouche. It was an activity organized by the local Type 1 Diabetes local support group. We had the chance to meet Sebastien Sasseville (http://www.sebastiensassevilleinspires.com/), the first canadian with Type 1 to make it to the summit of Mount Everest. It was very interesting hearing what he had to say during his presentation as well as chatting with him afterwards. Adele brought a friend and they really had a good time. The evening ended with a bombfire. And I came back with a renewed sense of hope for Adele's future after Sebastien's talk. My dream is for a cure first and foremost, but also for Adele to thrive despite (or even because of) her diabetes like Sebastien Sasseville. Until then we'll try to keep a positive attitude while playing the Type 1 game and hope it rubs off. Or like Sebastien would say "Feed the GOOD dog and starve the bad dog".
Posted by Mike LeBlanc at 3:47 PM 1 comment: 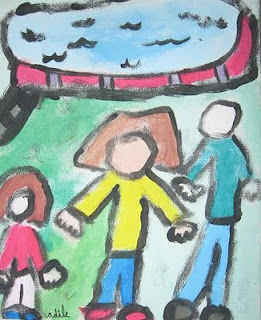 I started this blog in order to try to educate people on what Type 1 Diabetes really is. I didn't know what Type 1 Diabetes was until it was forced upon our family. How could others who weren't affected know? I found it very frustrating when friends didn't get it. I found it impossible to explain how Type 1 affects our day to day life in a simple conversation. I wanted to share specific details on what we go through every minute of every day in order to keep Adele alive and give her the appearance of health. I wanted more people to realize the severity of the chronic disease and the long term effects that it has on it's sufferers. That is still the main goal of the blog.
But... I have also been receiving feedback from families who already know what it's like to play the Type 1 game since they've been chosen as players as well. Some tell me that this blog makes them feel less alone knowing that we're going through the same thing. I am happy that I can help them, even in a very small way, and give them hope. Today's entry is for these people. I hope it inspires you and helps you grow...
Instead of talking about all that is taken away from Type 1 gamers, I would like to list things that are gained from playing the Type 1 game.
If someone would have told me 10 years ago that today I would be parenting a child with a chronic disease requiring as much work as the Type 1 game, I would have told them that I could not do it. I would have told them that I could not survive such constant stress. I would have told them that I was already stressed to the max and that something like that would surely push me over the edge and that I simply could not do it. I would have told them that I didn't have what it takes. I would have told them that I could never hurt my child with a needle and that there is no way that I could calculate a drug dosage before adminstered it to my own child to keep her alive, and if I were to make a mistake and give her too much, that it could also kill her. I would have been wrong.
Playing the Type 1 game has taken it's toll, but I am surviving and it has made me discover inner strength that I never knew was there. I feel lucky in a way to have been given the opportunity to grow, to have met amazing people through my involvement with JDRF and to have been able to help other Type 1 gamers suffering just like me. Hardship breeds strength. It forces you to really take a look deep, deep inside of yourself. I am amazed at how far we have come since the game started. It has taught me (and Adele) to suffer. Living is impossible without suffering. Society teaches us that suffering is bad. Without the contrast of hurt, how would we know what joy feels like? I mean, I don't believe in physically causing injury to someone to make them grow, but since suffering is INEVITABLE, isn't it beneficial to raise our "pain threshhold"? It has also made me appreciate the small things. Even a very ordinary weekday with good blood sugars which help Adele feel as normal as possible really, really makes me happy.
Don't get me wrong, it's been a rollercoaster ride (and not in the fun way) and it still is. I'd stop playing the Type 1 game in a fraction of a second without hesitation if I could, but I can't. So why not try to find some positive in all of this?