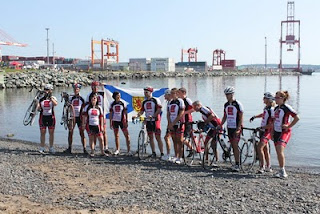 My 2010 Cyclebetes national relay and community ride adventure has been done for a few weeks already. Lots of planning, anticipation and training resulting in 670 kms (or 402 miles) ridden in 23 hours over 4 days. The effort left me quite wrecked and destroyed actually but we’re $13,000 closer to a Type 1 cure because of my efforts so it’s was well worth it. 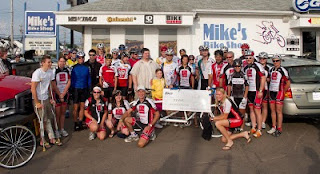 What does it take to be part of the Cyclebetes national relay? First and foremost you need a sense of adventure and a willingness to step out of your comfort zone. Up at 5:30 am most mornings, often on the bike an hour later at 6:30. You’re eating, trying to recover, trying to rest, driving, working on bikes, setting up camp and doing multiple other chores mostly the rest of the day. You eventually crash at around 11 pm or later, hopefully in a relatively comfortable bed in the RV (sometimes on the floor) or in a tent. You try to get some sleep because you have to do the same thing the next day. And that’s if you’re part of a team that does not have any longer days where the riding extends into the night.

At the end of your journey, you’re exhausted, but transformed and inspired. You’re so happy to sleep in your own bed and to see your family, but sad to leave your extended Cyclebetes family. Your butt is very pleased to not be perched on a bike saddle and your legs are happy to not have to turn pedals for a while. But you feel this powerful feeling deep inside that you made difference. You were part of a team with a very important goal: to deliver on a promise to cure Type 1 Diabetes. As soon as Adele jumped in my arms when I got home all the pain and fatigue went away and it was all so worth it. 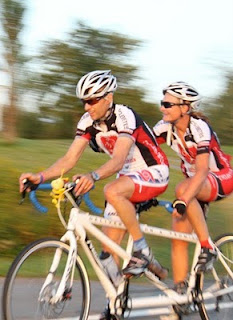 My Cyclebetes relay pull this year was 4 days through Nova Scotia and New Brunswick. Less than half of my mileage was on the tandem (Diabetsy) and the rest was on my own bike in pursuit of my own personal objective of 600 kms in 4 days. I am not a professional athlete, in fact I have a full-time day job, a house and second-hand Type 1 Diabetes. I’m just a regular guy who loves to ride a bicycle and who believes that we always have a choice. We can be the complainer or we can choose to do something. It doesn’t have to be huge, but it’s still something. Quite often these little “somethings” can make all the difference. You just never know… Like during the relay stop at the Pharmasave in Truro, Nova Scotia when a young boy and his mom came up to see us. The young boy was very impressed to see the bikes, especially the tandem. His mom told us that he just loved riding. She also told us that he had just recently been diagnosed with Type 1 Diabetes. I knew exactly how she felt. You could see the pain and suffering in her eyes. Or when we stopped on the side of the road somewhere between Woodstock and Edmundston, New Brunswick, literally in the middle of nowhere quite early on a Tuesday morning, 3 young kids and their grand-mother came running down a driveway with a $20 bill in their hand. They had heard about the relay on TV and just happened to glance out their window when they saw our caravan. Often the little things are what touch us the most… 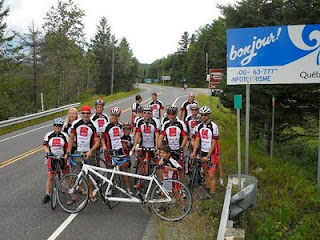 There are times in life when it’s just gonna hurt… no matter what. So, you better make sure it’s worth it.
Posted by Mike LeBlanc at 2:51 PM 4 comments: