The power of our intentions 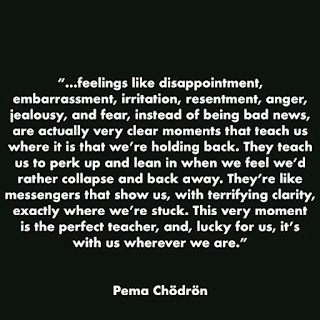 So now that 2017 is in the books, there is a lot of talk about 2018 New Year resolutions.  At the end of 2015, after struggling with Pericarditis, my resolution for 2016 was that I wanted it to be the year of my “reboot”, the year of a better and healthier me.  That kindof went well until July when I crashed mountain biking, hit my head, suffered a concussion and the rest of 2016 was one of the worse and most difficult periods of my life living with Post-Concussion Syndrome.  For 2017, I had simple aspirations.  And I also stopped calling them “resolutions”, using the term “intentions” instead.  For some reason, intentions seems more like it isn’t just me, but rather me working with the universe, trusting that it will give me what I need.  For 2017, my intention was simply to not mess myself up again like I did in 2015 and 2016.  Even if last year was another tough year for me with the ongoing Post-Concussion Syndrome, I am very thankful for the improvements in my health in the last 12 months and that I did manage to not hurt myself again which would make me believe that I have smartened up and gained at least a bit of wisdom.  Or maybe it was just better luck with the universe giving me a much needed break?  I’ll go with a certain amount of gained wisdom and a bit of luck.  And thank you universe for having my back…

My intentions for 2018 are simply to listen to my body in order to continue to get healthier and to also continue to work on myself emotionally.  These intentions will likely be what I strive for the rest of my life actually.  I believe that all of our hang-ups, bad habits, addictions and vices are symptoms of underlying emotional trauma.  Everyone has them.  It’s simply a part of being human.  If you don’t think that you do, it’s just that you’re unconscious or unaware.  Society doesn’t encourage or nurture the recognition and healing of our wounds.  Unhappy people make better consumers.  Our psychological wounds are really just unpleasant emotions that we are holding onto, emotions that are stuck.  I believe that it is our purpose to explore, work through and release these buried emotions.  It is the absolute best gift that we can give ourselves, our families and the world.  If everyone did this, it would change the planet.  Now I’m not saying that I am better than anyone else because I have been putting in lots of time and energy working through my crap, I am just saying that doing this is the single thing that I have ever done that has had the greatest positive impact on every single aspect of my life.  Do you want to stop overeating, you need to find out WHY you are overeating.  Do you want to stop drinking too much, you need to find out WHY you are drinking too much.  Do you want to stop working too hard, you need to find out WHY you are working so hard.  We’re taught to search for peace and connection externally whereas the answer is internal.  What are you trying so hard to avoid feeling? 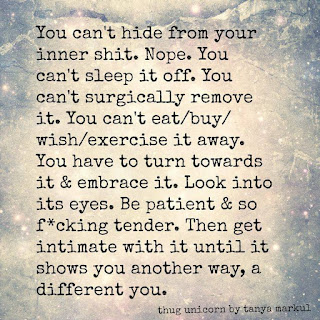 Last fall, my physiotherapist at the UdeM concussion clinic compared Post-Concussion Syndrome with a long-term, seemingly never-ending hangover.  I didn’t really get the analogy at that time since I felt more like I was constantly drunk rather than hungover.  But the last month, the intermittent hangover-like headaches have surfaced and that ironically made me quite happy.  I felt happy because changing symptoms usually means pealing another layer of the healing onion and also because it is still easier for me to focus with this headache rather than being overwhelmed by the spaced-out, disconnected, lost in fog feeling that I had been feeling for so long.  In this case, for me, the hangover is indeed much better than the buzz.

I am very encouraged to be having more and more good days, intermittent periods of feeling normal again, like my old self.  But it scares me at the same time, because I can’t be (or chose not to be) the same.  Our brains are different from our other organs.  They can heal, but they can only take so much trauma.  I’ve read an article where they used the analogy of the brain as a tin can.  Once dented, the dent can be fixed by popping the aluminum back out bringing the can back to its original shape and condition, but each and every time that you do this the can becomes more susceptible to further dents until eventually the can simply becomes permanently damaged.  Looking back, knowing what I now know about concussions, I certainly have suffered a few growing up, never anything as debilitating as this last one and I certainly don’t want to live through another one to see if it will be even worse.  I mean, I will live my life, but I never want to forget what I went through this past year and a half and will do every single thing that I can to protect myself from another one by being vigilant, as mindful as possible and never forgetting.

When I was young, I remember wondering if my friends saw the world the same way that I did.  Was my green the same as their green?  How about their red and blue?  Did we see colors and shapes differently?  There was no way to know but I thought it would be so very cool to see the world through someone else’s eyes and brain.  As I got older and began better understanding how the human body worked and looking at our differences, I began to understand that our experiences of the physical world are certainly unique.  But for the most part, we just unconsciously assume that everyone experiences the world like we do.  Living with Post-Concussion Syndrome is similar in that it’s very subtle, invisible and everyone just assumes that you’re fine because on the outside you look fine.  I get upset when someone tells me that I’m fine now.  Don’t make that assumption.  That’s not for anyone else to decide but me.  #mybrainmyrules.  Type 1 Diabetes is very similar in that it is an invisible disease.  Even if Type 1 gamers seem fine, it doesn’t mean that they are.

I’ve become a bit of a hermit.  Even if watching TV is usually OK for my brain now, especially non-action programming consisting mostly of dialogue, I don’t watch it as much as I used to.  I’ve become disinterested in sports in general to be honest.  Maybe that will change with the winter Olympics next month?  And I still can’t really watch contact sports without cringing every time a player gets slammed.  We really need to stop obsessing about the big hits, fights and violence in sports.  It’s sad that society gets off watching humans hurting each other like that.  Even if they do get up and seem fine (and look so very “tough” in the process) after receiving a blow to the head, we’re starting to realize that damage is being done and that there are long term consequences to this.  Chronic traumatic encephalopathy (CTE) is widespread in many contact sports.  CTE has been diagnosed in a staggering amount of retired professional football players and even in players who have only played at the high school level.  These former star athletes don’t seem so tough anymore when they shoot themselves in the head or even worse, become the next mass murderer before turning the gun on themselves.  Only then will we ask ourselves what went wrong.  Maybe when your brain is reduced to mush it’s bound to have horrific consequences?

Growing up in Canada, I played hockey.  I can’t say that I ever really loved the game.  Playing wasn’t really a choice unless you couldn’t afford it.  It’s just what every boy did in the winter and every father’s dream.  I loved the feeling of skating but always hated the physical aspect of the game, the intimidation, the cheap shots.  Playing bantam house league, I checked the star player in the opposing team and he didn’t get up.  Even if it was a clean check, he twisted his knee when he hit the boards.  My coach and parents were so proud of me.  When you stop and think about it, that is quite messed up.  It would have been illegal (assault) to do that outside of the ice rink, but glorified and encouraged in the game.  And now, with modern equipment, players feel much more invincible and don't feel as much when they're dishing out punishment so they can hit that much harder. The helmet only protects the skull, it doesn’t protect the brain. And unless you've suffered a bad one with lasting effects it is impossible to understand how bad a concussion can be. It affects every single aspect of your life. Everything. There is nothing you can do without using your brain, not even fall and stay asleep. It's completely different from a sprain or breaking a bone. The ER will send you home if your brain isn’t bleeding or swelling, but it doesn’t mean that you’re going to necessarily feel fine in a few days like they tell you.  Traumatic Brain Injury (TBI) recovery takes from a few days to forever.  Maybe things will never change and contact sports will continue to be popular but I'm not sure that we're doing as much as we should to protect our athletes, especially young players. A teenager surely doesn't have enough knowledge and wisdom to truly understand the risks and possible long term effects of getting his brain scrambled on a regular basis.  We created all contact sports along with the associated attention and hype that we have given them.  We made our beds and now we get to sleep in them.  I wouldn’t bet on it but I sure hope that we wake up sooner than later.

I believe intentions to be so very powerful.  About 4-5 years ago, I was drawn to minimalism, simplifying my life, slowing down, enjoying the little things more, mindfulness, meditation…  I loved reading about it all and really felt that it resonated with me.  But for some reason I couldn’t put it all into practice.  I still felt like I was racing through my life and that all of this sound advice was really more like fiction for me even if in my heart I knew it to be truth.  Then I hit my head and suffered persistent physical PCS (Post-Concussion Syndrome) symptoms that literally forced me slow down, simplify, be more mindful, do more yoga and meditate.  I sent the intention out to the universe and it responded by creating life circumstances that gave me what I asked for.  Crazy and so very simple at the same time.  Be careful what you wish for I guess, but at the same time I feel very grateful for all the good that I have in my life right now.