Is it Spring already? 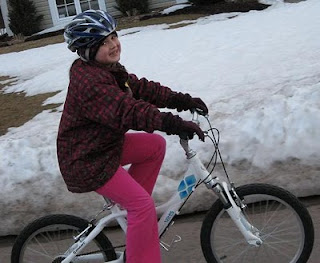 We've gone from winter to spring in less than 1 week in our corner of Canada. No complaints. As much as I enjoyed skiing and the other winter activities, it feels so good to be able to bike outside again. Even Adele has been asking to go biking which is usually the other way around. I know that winter isn't over yet and that we'll likely get a few snowstorms before the end of it all but I'll still take the nice weather while it lasts.
We've received the dates for this summer's Diabetes camp. I was really hoping that this would be the first year that Adele would go, but it's not looking so good. Actually, the idea is pretty much dead. I asked if a parent would be able to stay for the first night or if we could go pick Adele up so that she would sleep with us but the camp director said that wasn't possible. The only option is to drop her off and tell her "See you in a week". She really, really doesn't want to go since she rarely (ie NEVER) goes to sleepovers and she doesn't have any current friends at camp. I know that she would love it and make friends once there, but I can't go through the crying and screaming of forcing her to go and just leaving her there against her will. She goes through enough already because of the Type 1 game. Our only chance is one of her babysitters (who is also a Type 1 gamer) who is a camp counselor (or something like that?). If she would be there at the same time as Adele, then maybe (a big MAYBE) she'd be willing to give it a try. If not, we'll try again in 2011. Maybe the whole camp thing is us just being selfish wanting a week off from Type 1 gaming? Who knows?
I have an obsessive personality. My wife reminds me every once in a while and I really have no problem admitting it. I'm not compulsive, just obsessive. It's sometimes about biking, training or whatever else I have going on. Since our last Diabetes clinic apointment, I've become a victim of obsessing about Adele's A1C. For non gamers, the A1C blood test mesures the average blood glucose level for the last 3 months. What I hate about this test is that it's pretty much a setup for failure. It'll never be as good as a non-gamer. The pancreas simply does a way better job at keeping blood sugar in check compared to the human brain. It always seems to be "not good enough" or that it "could be better" or even "let's see if we can lower it even just a tad more?". Lower is supposedly better, but this has to be achieved without too many dangerously low blood sugars. I hate the test, but can't help but get caught up in the whole competition of getting a "good mark". No matter what Adele's A1C is, there is absolutely nothing more I can humanly do to help bring it down... Or maybe I should rephrase that and say that there is nothing more that I can do and still maintain sanity. See, that's where the guilt comes into play, because you can always ask yourself if you could do more. I really don't want Adele to get caught up in that guilt game... It sucks and absolutely nothing good comes out of it. The psychological aspect of the Type 1 game is often overlooked, but is still a very, very big part of it... and sadly most often this suffering is not apparent from the outside.
So, back to my A1C obsession, Adele's result had gone down a bit since the last one, but still not enough to meet the goal in my obsessive mind. Our doc suggested that she's now old enough to aim for a lower blood glucose at night. Lower numbers throughout the night should be the single change that will have the biggest bang for our buck in regards to lowering her A1C. Food intake and insulin boluses to cover them during the day make it much more difficult to maintain a flat blood glucose variation line compared to basal insulin only during the night. We already wake up every night to check, so we should be able to catch lows. Nights when we're using the Continuous Glucose Monitor (CGM) gives us an extra layer of security given the alarm that goes off when her blood sugar drops too low. We're now aiming for the 6 to 7 (108 to 126) range instead of 8 to 9 (144 to 162). The funny thing about this is that we aim for 6 or 7, but most often we're not there when she (or I) go to bed.
One of the things that I hate about tightly controlled blood sugars is the extra snacks that need to be given more often to avoid lows. I hate "force feeding" like that. We try to teach Adele to not overeat and listen to her body, but then other times, like tonight when we decided to go for an unplanned bike ride, she NEEDS to eat something before heading out to avoid going low. Sometimes I just wish we could... just go for a bike ride without obsessing about the numbers !
Posted by Mike LeBlanc at 12:48 PM

great post Mike, I just had my A1C break down but thanks to all my supporters I'm back in the game as you say gearing up to kick D's butt.... I guess we will see who is on top in 3 months!! We also are having wonderful spring weather in our corner of Canada....enjoy!!

Your right, the psychological aspect of the Type 1 game IS often overlooked. However it is a HUGE part of the game. Its exhausting!

Glad you guys are having great weather. Hope it holds out for a while.

I feel so much better after reading this, my friend!!!

Well, some might debate that...but...it feels good to be in some good obsessive company ;)

Sounds like such a good solution on paper, but as a gamer I KNOW it is never that easy. Turning off basals at night when there is a low usually backfires on me, and jumps them to a high. I haven't had the guts to play around with it enough to figure it out.

I'm with you Mike, I feel like my boys are always stuffing food down their throat. It just doesn't seem right.

And lastly, I can't get my boys to agree to camp either. I've been told to make my 12 year old go anyway. (Told this by T1 people who were made to go when they were young, and grateful for it.) But it is just so not J's thing. I'm not sure what to do. Guilt Guilt bo schmilt!

Don't sweat the Camp thing - Ben went the first year he was diagnosed - age nine - and hated it, so we didn't make him go again. And as far as "the week off" idea, personally I still fretted the whole week he was gone. Some kids love it, others hate it, and that you can't change. I don't see the benefit if the whole idea just causes stress, we have enough of that in our life.

My daughter went to camp last summer for the first time. She was 8. The camp we have near us offers a one week day-camp or a sleepover option. She never in a million years would've chosen the sleepover. She went to the day camp and loved it. This year she's still not ready for the sleepover, so we're daying it again. It's great for her to meet other T1s, but you have to go at her pace. No need to force her. Maybe you could take her there one day this summer just to look at it and see what it's like. Remember, just being a T1 makes her one of the bravest children I know. She doesn't need to go to camp to prove this.

Thank you very much for all the camp comments... They really made me feel better about the whole thing.

And Pam, day camp would be awesome! I know she'd want to go if she didn't have to sleep there. Unfortunately it's not an option in our part of the world:-(

Emma's going to be at camp, she'd have at least one 'semi familiar' face around. :) Like every mother bird lets go of their hatchlings and let them fall out of the tree, you will need to learn how to let her go and be 'herself'. They did a wonderful job last year with Emma's BGs and Emma had such a great time! Also, they go there to learn how to be more independant. Who know, she might teach you a new move to use in your type 1 game.

Thanks for the comment Tim. I am ready to "let her go" and agree that it would do her so much good, but it's her that doesn't want to hear anything about it. I did mention Emma to Adele, but she still doesn't want to go. We'll see...