The hardest ride, but still the best... 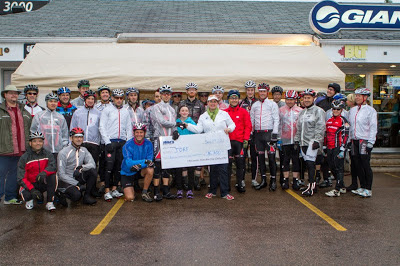 No matter how my frozen brain cells analyzed the situation, the common logic conclusion was always that I should pull over, get off the bike and hop into one of the warm and dry support vehicles.  I was recognizing many symptoms of hypothermia and my constant shaking was really making it unsafe for me to be riding a bicycle.  It was about 10 degrees Celsius and I was literally soaked to the bone.  One of the things that cycling has taught me is to be able to endure a certain level of discomfort, but honestly, I had a difficult time thinking of a time when I was more uncomfortable on a bike than at that moment.  Like I have done many times before, my answer was to literally attempt to ride away from the problem.  I just needed to go harder.  After a few minutes, the extra workload seemed to bring up my core temperature and I stopped shaking.  I was not comfortable by any means, but at least I was no longer fearing being hauled off in an ambulance because of a dangerously low body temperature.

The day before the ride was such a beautiful early fall day.  It was sunny, not too warm with no wind.  70 riders were signed up to ride and I was so stoked!

The next morning, Saturday, September 29th, we woke up to cool temps and heavy cloud.  As soon as I pulled into Mike’s Bike Shop, a light rain started to come down.  It was 8 degrees and the forecast looked quite wet, but riders just kept rolling in.  In a way it was the perfect analogy to Type 1 gaming.  No matter how much planning you do, there are still some uncontrollable factors that can and do mess with your perfect plan.  Just like the crap weather we were facing, high and low blood sugars, bad infusion sets just happen.  It’s just a Type 1 game rule…

The early group rolled out at with the main group leaving about 30 minutes later.  It was cold.  It was wet.  It was very uncomfortable.  I was chaffed in areas that I sincerely did not think possible on a bike ride even after a lifetime of riding.  Enduring such pain as a group like that, especially for a reason like helping finding a cure for Type 1 Diabetes creates a kind of bond amongst the sufferers.  A situation like this really teaches you what you’re made of.  The grit and determination of some riders really surprised me.  200 kms cycled in one day with close to 2000 meters of climbing is a challenge in itself, but really tough in these conditions.  For me I believe that in a way it was easier to find the courage to keep pedaling given the whole reason for the ride, but for many without a personal connection to Type 1 Diabetes, they must have had to dig a little deeper to find the motivation to keep spinning the pedals.  I personally have the utmost respect for all who completed the entire distance.  Congrats to the riders who made the finishers list…  Honestly, congrats.

Most riders, including myself, deemed the ride as the “hardest day on a bike in my life”.  One of the things that I love most about cyclists is their positive attitude.  You organize an event that turns into a near-death experience and the riders don’t bitch or complain…  They thank you.

From Adele and all other Type 1 gamers out there, I would like to personally and sincerely thank everyone who made this happen!  Thanks to all participants and to the sponsors: Mike’s Bike Shop, Arcteryx, Giant bicycles, Terry Tomlin, Cycle Lambert, Sock Guy, Simple Signs and Dieppe Rotary club as well as all who donated including Pablo Vergara for all his help and for sacrificing his dignity and hair for the cause…

*Photo by Don Ricker photography
Posted by Mike LeBlanc at 10:57 AM

BRAVO! What an event, glad you went out and tackled it together - actually sounds a bit fun :)

Nice post and nice blog. I just added you to my blogroll. Nice to find another d-dad blog. Take care.

You're an inspiration. I saw your blog and wanted to share a petition I started with my 12 year old T1 son's future in mind.. Because of the media's failure to clarify type, Type 2 has inadvertently assumed the name Diabetes. With this comes so much confusion for the general public. A name revision is needed. Confusion equals conflict. Our petition has 2,000 signatures in under 2 weeks. We are moms of Type 1 children who have filed a petition to revise the names of both Type 1 and Type 2 Diabetes to more accurately reflect the nature of each disease. We tried to do this in a way that benefits both the Type 1 and Type 2 communities. We sincerely hope that we have accomplished our goal to make this petition benefit all of us. Please click on the link below to view our petition on change.org and please read it in its entirety before passing any judgement.
We respect your opinion if you choose not to support the petition. We apologize if we have offended anyone in any way with the language or purpose expressed in our petition. We truly tried to look at our petition from the position of all within the diabetes community and it was certainly not our intent to dismiss anyone's feelings or needs. We thank supporters, and non-supporter alike, in advance for taking the time to read and consider our petition.
Thank you,
Jeanette Collier & Jamie Perez
http://www.change.org/petitions/revise-names-of-type-1-2-diabetes-to-reflect-the-nature-of-each-disease