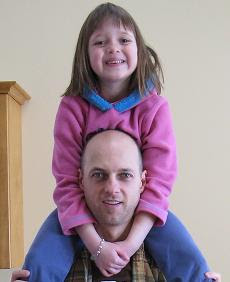 There has been lots of talk and blogging about the Oprah Diabetes episode. Here is a very thorough list of blog posts about the show: http://www.d-mom.com/type-1-tuesday-oprah/ on the D-Mom blog.
Adele overheard me discussing the show with my wife the other day and asked why I now "hated" Oprah (not that I liked her before, but I didn't "hate" her either). Whenever we're discussing anything at all and she is around, she always tries to eavesdrop (serious discussions can only happen after she's asleep). I explained to her that Oprah had dedicated an entire show on Diabetes but hadn't spent enough time differenciating Type 1 and Type 2. I told her that Dr. Oz had really just reinforced the misconception that all Diabetes are the same, that it can be reversed and that it's basically the sufferers own fault. We had had a similar conversation with Adele before trying to explain the differences between Type 1 and Type 2 after she had heard comments about Diabetes (Type 2) on TV. It is very, very important for me that Adele knows that it's not her fault whatsoever that she has diabetes. Kids hear things and often interpret them in a bad way when they don't fully understand the circumstances or what's being said. I do not want Adele to internalize that she caused her Type 1 Diabetes by not always eating healthy food or that she could have somehow prevented it. She's insecure enough as it is without hearing all of these general Diabetes comments and stories which are really meant for Type 2 and not Type 1. But she is 9, and when she hears the word "Diabetes", she listens carefully to what is being said since the big D is such a big part of her life.
Misconceptions about the Type 1 game are so common and a constant source of frustration for Type 1 gamers. How many times have I been told by non-gamers that they know what it's like to live with Diabetes because their elderly father or their dad's aunt or their grand-mother have it as well. Then I ask if it's Type 1 or Type 2 and they look at me and say "Is there more than one type?" I then ask a few questions like when they were diagnosed, if they're on insulin and 99.9% of the time it's Type 2. Then I try to explain that it's not the same. How many times have I tried to explain that Adele's diabetes is not "real bad" because she's on insulin or because gets tested over 10 times each and every day? Adele is at an age where we can't always "protect her" from these confusing general Diabetes comments and messages. She's like a sponge carefully absorbing all of this information. She's old enough to understand part of what's being said, but too young to make the difference between what's true and what's not in her case.
This is the psychological part of the complex Type 1 game that we play. Who said it was just about blood, counting carbs and needles?
Posted by Mike LeBlanc at 9:06 PM

The good news is our kids have us and we will have the biggest influence on them to ensure that they know this is not their fault.

Nevertheless, it does sadden me that the globalizations were made.

Thank god that our kids have us and know the real truth to the big ugly d , our kids and us live it everyday . Until the medical community has it down pat as a whole we will still have to fight generalizations like this . amen to you for teaching your daughter the difference .

Your daughter will grow up knowing who she is, and that she is doing a great job managing her diabetes.

How do I KNOW this??

Parents have a HUGE impact on their children and you are doing a GREAT job. Keep the dialoug going, she understands more than we think!

Also, my 12 year old is a huge eavesdropper too! If he is within earshot, we can be SURE he is listening.

Keep up the great work! One by one...one day at a time...together we just have to keep the truth coming!!!!

Mike, Have you thought about writing to the O show? I think that your blog about your daughters diagnosis might actually catch the attention of a producer, and if you did it now, just as the JDRF walk for a cure is getting under way, they may consider doing a show on type 1. I know she has done follow up on shows before after someone contacted them. At the very least, you might feel better by venting at the source.

Hi Mike, again I am just amazed at how parallel our lives are with our daughters. The misconceptions are great and I need to tell myself to have more patience at times with people as I was one of those people before Keeley was diagnosed. Considering the epidemic that it is, I was surprised to hear school officials ( while attending K's pre-K stuff) tell me that they've dealt with a child with "severe" diabetes with a pump before. "SEVERE"? This is one of the reasons I am so scared to send her to school. It's not severe, it's Type 1. I guess Type 2is not severe. I'm glad that I missed Oprah. I probably would've been swearing at the TV (under my breath, of course - I have 3 eavesdroppers ;0) All we can do is educate those around us and communicate openly with our kids. That's the best we can all do....take care! Nat