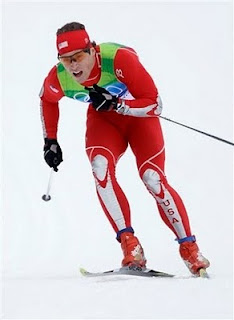 Millions and millions have been tuning into that thing in Vancouver - the 2010 Winter Olympics. To me the Olympics represent the essence of what living really is. By living I don't mean existing, I mean really, really living life. The Olympics represent setting a goal and working towards achieving it. The basis of moving forward. It's not only about cheering for your own country, but recognizing the efforts of each and every athlete towards their quest at becoming the absolute best that they can be. As human beings we're all born with this thing called potential. Olympic Gold medalists are born each and every day. Only a few of these will develop these skills and capabilities. The others won't. It's far too easy to take the "comfortable" route. I am always moved by those who make the decision to leave this "comfort" zone and dare to tap into this potential. It's often a dark and scary place with many unknown obstacles. Not everyone has the guts to go there.
US nordic skier Kris Freeman does. After having been diagnosed with Type 1 Diabetes and being told by his doctors that his skiing career was over, he refused to listen. This was just another obstacle in his path that he would learn to overcome. No one had really ever done what he is doing, nordic skiing at the world class level while playing the Type 1 game.
On Saturday, February 20th, during the 30k pursuit XC ski event at the 2010 Olympics he had done everything that he could to prepare for the race including attempting to make the proper insulin adjustments for the effort. He usually nails his basal insulin and carb intake during races. It's a tricky formula. Aside from training, rest, recovery, choosing the proper ski and wax, Kris also needs to "dail in" his insulin / carb intake. And in order to perform at a World class level, blood sugar levels need to be "dead on" - too low and his muscles don't have enough fuel to function whereas too high and his muscles can't produce maximum power output or rid lactic acid. In order to win, he HAS to get it right. Easier said than done when you're playing such an unpredictable game where most of the time you're really just "winging it". There are absolutely NO guarantees.
The dosage used was the same as what he had successfully used in a past race not too long ago. That's the best that he could do - base his decision on experience and "hope for the best" really. Everything was going well in the first 3rd of the race when suddenly it wasn't... His blood sugar dropped and he could no longer continue. Laying on the side of the trail, asking for much needed sugar until a german coach gave him fast acting glucose. His race was over. Gone in an instant.
Then Kris did what playing the Type 1 game has forced him to do many times before. As soon as the fast-acting sugar kicked in and brought his blood glucose level back up to a "normal" level he got back up and finished his race... in 45th place. Not exactly the result that he had hoped for... but far more impressive than the non-Type 1 gamers that finished on the podium that day.
If there's one thing that I can hope for Adele's future is that she will dare to live like Kris... Then I'll know that she will be okay.

I say... "it just wasn't his time and he will be back". That WILL be one sweet victory if you ask me.

He is an inspiration for sure. I'm proud of what he has accomplished...and I look forward to the next olympics!

What an inspiration to all Kris is.