When living is about... not dying

Adele was just sitting there asking me why everything felt and looked so weird. She kept trying to explain to me what it felt like to have a blood sugar of 1.3 (23) while my wife and I were shoving juice, Dex and gummies into her mouth. I kept telling Adele to just eat and drink even if deep down I couldn’t stop but think that she was trying to explain to me what dying felt like. I was trying to not throw up, hoping that the ingested sugar would reach her bloodstream before her nervous system decided to shut down and enter unconsciousness. She had only been sleeping about an hour and was dropping fast, 2.5 (45) 10 minutes earlier and 9.0 (162) an hour before that. It’s just not right for a 10 year old to go through something like this. It’s not right for anyone to go through something like this. 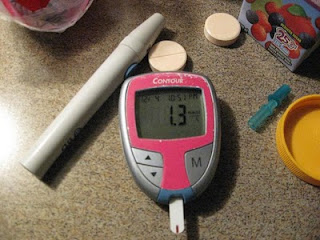 How could I have let this happen? A stubborn high that didn’t seem to want to come down (until now), a very light bedtime snack, a new infusion site, a basal set too high, a sudden increased insulin sensitivity, a Continuous Glucose Monitor vacation and a temporary loss of focus are some of the causes that come to mind. We had lost ourselves while decorating the Christmas tree and then while watching a movie. We had enjoyed this special family time together a bit too much. I should have seen this coming, but I didn’t. I just felt like crawling under a rock and dying… I felt like giving up. But I can’t. Like with every other close call, I need to dust myself off, refocus and keep going… for Adele, for our family and for myself. I need to regain the confidence that was lost.

Even if the rest of the weekend was also full of rides on the “glucose rollercoaster”, Adele told me Sunday night that she had an awesome weekend. I guess it’s all in the perspective. Thanks for teaching me so much Ad…

Yesterday I wasn’t sure if I wanted to share this here. It seemed too personal and I was not looking for pity. I just wanted to put it behind us and move on. But then I realized that sharing stories like these are why I started the blog in the first place. This is our life. If it makes even one person realize the seriousness of the disease prompting them to support JDRF in it’s search for a Type 1 Diabetes cure, it’s well worth sharing.
Posted by Mike LeBlanc at 11:13 AM

Maybe it's something in the wind??? We've been riding that coaster for the past 4 or 5 days and I can understand how you're feeling. I can't imagine how it for Adele and Elise

Thank you for sharing, Mike. Not only does this help with advocating and educating...but it also help fellow families know they aren't alone when these things happen.

It's so incredibly hard. Hard to face these minutes and realize how close you came.

And yet, the majority of people I meet think it's "just diabetes".

Oh Mike I am in tears reading this, how scary!! thank you so much for sharing!!

Thank you for deciding to share. You won't get any pity from me. What you will get is sympathy, as in "Oh, I know how that feels."
I know something of how Adele felt more than how the parent of a diabetic child feels.
However, when I make a mistake in self-management that frightens and challenges and makes life difficult for those that love me, I feel like a failure, but I know, as you do, the best thing I can do is re-commit to do my best to keep it if from happening again.

today I am darn tired of this disease and cried after reading this...I'm so sorry that this is happening to your child just as it tears me up that things are often such a struggle for my two year old. HE doesn't complain just as your daughter looks back and says it was a great weekend, but we know...we know that watching a movie and decorating a tree shouldn't lead to a panic moment or a sleepless night. We know that it's just not right. Today I am feeling totally overwhelmed and want to just say that it's not fair, and yes I know that life is not fair, but really this is sometimes just too much.

Here's hoping that the week goes well with a little less of a hilly roller coaster and more of a smooth sailing kind of week.

mike
thanks for sharing this. tyler has had 2 readings in the 20's over the past few months. it was scary and in the middle of the night too.... our ins. will not approve of a cgm, even after these lows... another story.

it is so heart wrenching to watch your child, so scared of the possibility. i am glad this is behind you and adele is fine... just reading this brings me to tears..

keep looking forward mike. i hope the adventures slow down this week..

Absolutely terrifying!
Thank you for sharing, and I agree - hopefully the story brings at least one more supporter on board.
Hang in there - giving up is not an option (not like you would anyway).

Thanks for sharing! We had a 26 on Saturday. She acted fine... and it scared the hell out of me. WHY does she not feel it? How close were we to coma or passing out? What you wrote really spoke to me... I've been there. And the really crappy thing is... I'll be there again. We all will.

Thank you for deciding to share Mike. It is our reality. A very sucky reality at that.

Hi Mike,
I have to say, I'm more and more impressed every time I read your blog. The strength and courage that you, Michèle and Adèle show is inspiring, even for those of us who can't understand what you're going through. I wish I could tell you more, give you hints, tricks, things to do, but I can't, as I do not know half the challenges you have to face. Let me just say that I admire you and your family, because even with all these challenges, you all keep smiling and making the best of things. Stay strong.

I could've changed all the names to our own in this story. We've had similar nights like this at our house. It is hard to watch our kids deal with such life and death issues and realize that it really is in our hands.

Thanks for sharing - We've all been there and can relate to the feeling of helplessness. It speaks volumes that Adele was able to look past her diabetes and focus on what a wonderful weekend it was otherwise. We could all take a page from her book. Happy Christmas and may the New Year bring comfort and a CURE!

Glad you shared - thanks Mike.

Marc Arsenault posted a link to your blog on facebook yesterday, and reading your story has changed my life. I knew that diabetes was dangerous but I realise that know nothing about it. I have two healthy daughters and fully understand how truly blessed I am everyday when I kiss them good morning.
Reading your story has shown me that my daughters and I need to get involved in something bigger then ourselves. As part of the regular school curriculum, their school requires every child to volunteer 12 to 16 hours a year.
We have contacted the Diabetes Association today and signed up as volunteers with hopes that what little we give can help your daughter and others like her.
Our blessing go out to you and your beautiful family.

Keep up the good work. I got diagnosed at 9 and I am now 25...It DOES get better. And now, more than ever, I understand that all my parents did, they did because they loved me. I have seen kids not as fortunate as I am and I can tell that your little girl is lucky to have you.

Even though sometimes it is hard, it can be done. And I hardly believe that everything I am today is because of what I had/have to go through day after day. That's why every year, on the day I got diagnosed, I try to have a little "celebration"...because diabetes won't beat me!

I came across your blog and wanted to share a little hope :)