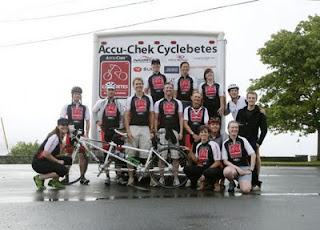 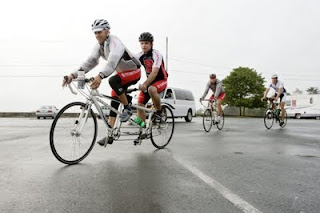 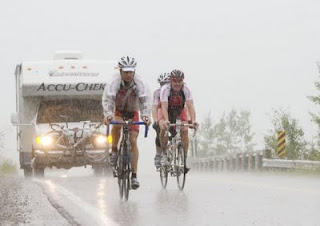 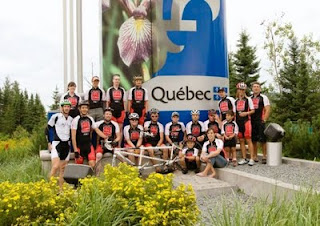 Saturday morning, August 22nd, Michele, Adele and I as well as our friends Rachel and Nadia packed our gear in our truck and headed out to Halifax. That afternoon was spent shopping as per the girls request and in the pool at the hotel. The Accu-Check Cyclebetes national relay Maritimes team had a meeting at 5 pm followed by supper. Because of the forcasted hurricane (Bill), we would make a decision at 5:30 am the next morning to see if it was safe to begin the ride to Moncton or if we needed to postpone.
Day 1 on Sunday, August 23rd, after about 3 hours sleep (much noise from a wedding at the hotel kept me up most of the night), we woke up to cloudy skies but no rain. We ate and made our way to Point Pleasant park for the departure of our journey. Alex Bates and I were the first ones to ride the tandem. After 2 flat tires, we managed to cover about 50 kms before handing over the tandem to Andrew and Jonathan. The heavy rain and gale force winds started just about then and followed us all the way through Wentworth. It was a very long and difficult day given the conditions. 14 hours after we left from Halifax, we arrived in Moncton at around 9 pm. I was exhausted.
Day 2 on Monday, August 24th began with a breakfast and gathering at Mike's Bike Shop in Dieppe. We left Dieppe in the light rain at about 9:30 am accompanied by 3 local riders who would help us get to Fredericton. After many kilometers and flat tires, the sun finally came out after Jemseg just in time for my shift riding the tandem. Chris Jarvis went ahead and pushed the pace to around 37 - 40 km/h. After about an hour of this, my right knee was telling me it had enough of the uncomfortable position on the tandem and I went back to riding my own bike. We made it to the campground at around 6:30 - 7 pm. It was another long day. That evening, we had a team meeting and decided that we would leave early the next day (6 am) and that riding shifts on the tandem would be 1 hour instead of 2 or more like past days.
Day 3 on Tuesday, August 25th began with a very early wake up call at 5:15 am. I was very tired and quite happy to not have the first shift on the tandem. Megan and I were the last pair to get on the tandem just before Perth Andover and even hit the fastest speed of the day on one of the downhills (65 km/h). After getting off the tandem, I got on my own bike and rode the rest of the way to Edmundston. The sun was shinning and the views on the back roads travelled were breathtaking. We arrived at the campground earlier this time, around 4:30 pm. We stayed up a bit later around the campfire and met the Quebec team including 8 year old Liam who has been practicing riding a tandem with his mom all summer in preparation for this ride.
Day 4 on Wednesday, August 26th also began quite early (around 5:30 am). We rode our bikes to the Quebec - New Brunswick border for the official Accu-Check blood glucose meter baton handoff. I was both sad and happy to drive home after that.
The trip summary for me was about 18 hours on my bike (or the tandem) riding about 500 kms out of 800 kms in 3 days. I was sore and tired, but very inspired. Being surrounded by so many "do something" people was very good for my morale and gave me hope for Adele's future. Every single pedal stroke in the ride was bringing us closer to a Type 1 cure. Chris Jarvis rode about 10 hours on Sunday through the hurricane for a total distance of 220 kms. He woke up with a high blood sugar that morning which stayed high almost until noon. You could see that he was suffering and not 100% on the bike. He later told me that his sugar was up to 19 at that point. It came down in time for lunch, but then went low in the afternoon. His pump started beeping while he was riding the tandem with Barb. I rode up beside him after he asked me to check what the problem was because he didn't want to stop. His continuous glucose monitor indicated that he was low (3.9). We wanted to get someone else on the tandem so that he could rest and eat, but he insisted on continuing after juice and a snack. Kidney and pancreas recipient Alex Bates also did his share of riding on the tandem not even 1 year after his transplant. His 24 years of Type 1 game struggles have given him a maturity way beyond his years. I was very inspired by him being out there on the bike during a hurricane with a smile on his face. This was nothing compared to everything else that he'd been through. The Type 1 players were riding through high and low blood sugars. Their Type 1 destiny has taught them the true meaning of courage. Not once did I hear any of them complain.
I came home very inspired and happy to see my family. You can follow the relay here http://www.cyclebetes.com/follow/follow.php?pageID=150
Next up is our local Mike's Bike Shop Cyclebetes 200 km ride on Saturday, September 12th. I can't wait... http://www.mbscycling.org/cyclobetes.php?eventName=Cyclebetes2009&cbIndex=main
Posted by Mike LeBlanc at 12:00 PM