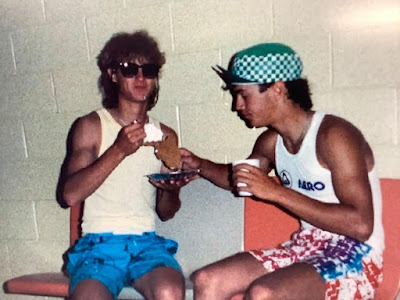 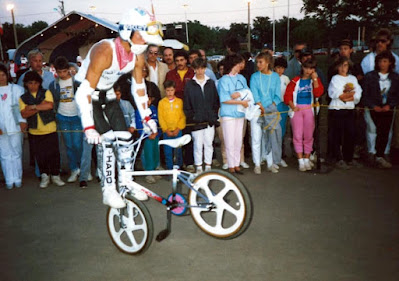 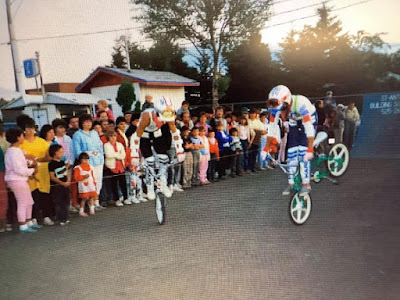 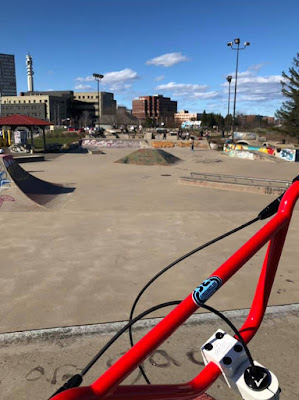 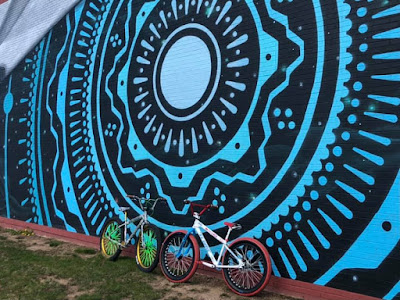 Mike Fougere from Mike’s Bike Shop gives Luc a call in the winter of 1986 asking if we would be interested in doing shows as part of the Shediac Lobster Festival that summer.  Without a smidgen of hesitation, Luc answers “YES !!”.  We need to go meet the organizing committee to make it official.  Mike Fougere sets it up and both Luc and I head to Shediac an evening the following week for the meeting.  They tell us that it would be for 5 days, from Wednesday through Sunday.  Two 30 minute shows per day.  And they would pay $1000.  Luc and I agree without hesitation.  Actually, we’re trying to control our enthusiasm at this point.  $500 each to ride our bikes!  Something that we would technically have done for free!  HELL YEAH!!  Where do we sign!  They’re working on the schedule / brochure and ask for the name of our performing duo.  Now, at this point we don’t really have a name.  We had used “2-Hip Trick Team” a few times in the past.  We’d stolen it from a few of our BMX magazine heroes, Ron Wilkerson and Rick Avella who did demos under the name in northern California back in 1983.  It was so far removed from New Brunswick Canada that we figured they wouldn’t mind if we “borrowed” their name.  Actually, we more likely figured they would never know since they probably had no idea where New Brunswick was.  But to be honest, as cool as Ron and Rick were, they weren’t us.  Or maybe I should say we weren’t them.  We had wanted to find something new and original, but couldn’t come up with anything.  As creative as we were with our riding, our teenage brains weren’t wired to come up with a creative and fitting name.  Then, after a short pause, we simultaneously blurted out “The Freewheelers”.

Fast forward to early July, after one of the Shediac Festival afternoon shows, we’re sitting on our bikes next to the ramps chatting with a few kids who came to talk to us and take a look at the bikes.  Just as we’re ready to head inside to get changed and put the bikes away, we hear a voice behind us.  “The Freewheelers eh?!?!”.  The voice seems familiar.  We both turn around and come face to face with this cool dude with flowy long hair and California surfer vibe.  Mike Plume!  With our BMX racing friend Rick Snyder behind him.  Dudes !!  Mike was home on vacation from Alberta hanging out with Rick.  They had just caught the end of our show and wanted to stop by to say Hi.  We knew exactly what Mike meant by his Freewheelers comment and to be honest we kind of felt guilty that we had borrowed (or stolen) his name.  He wasn’t pissed.  He was actually happy to hear that his name idea had not gone to waste.  Mike wasn’t riding anymore.  His focus was now completely on his music.  And as much as the Freewheelers was a cool name for a BMX Trick Team, it wasn’t really a good name for a band.  He said the name literally stopped him in his tracks when he heard it announced in the Lobster Festival radio promo a day earlier.  He smiled and figured it was us.  It was real nice to see Mike again and to catch up with Rick as well.

The Freewheelers, sponsored by Mike’s Bike Shop in Shediac at the time.  Today, close to 35 years later, Rick Snyder the president of that same Mike’s Bike Shop, now in Dieppe, still supporting the Freewheelers as we get back into riding BMX again !  Man, I just love it when life comes full circle like that !!