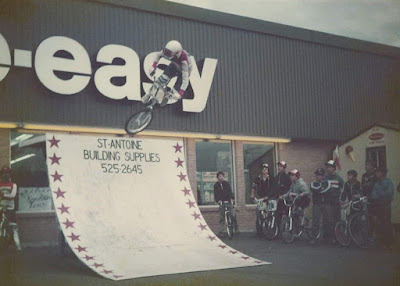 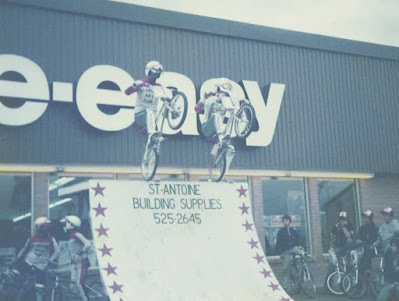 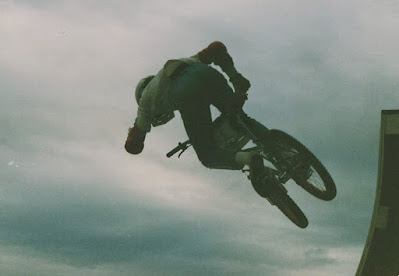 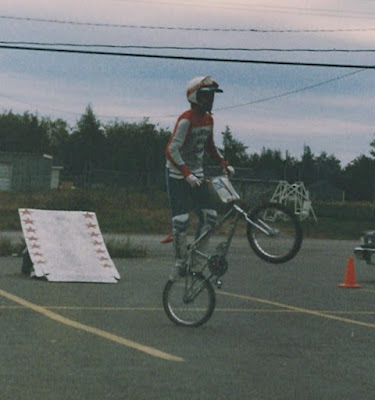 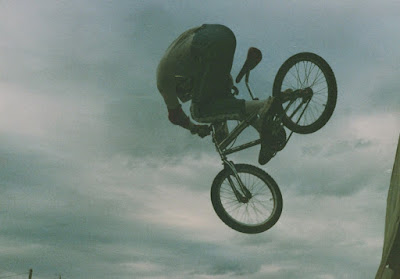 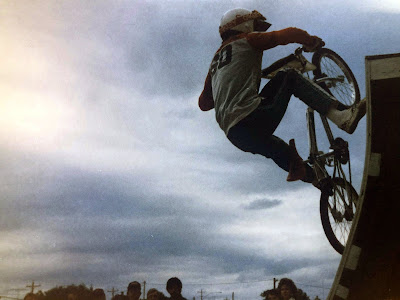 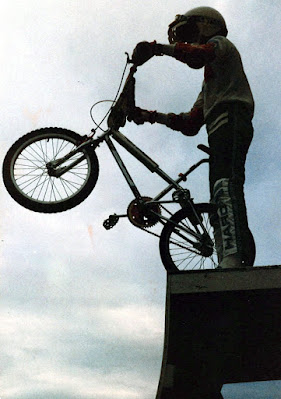 We had a date. We had a time. We had a location. We had permission. The only thing that we hadn’t really thought about was actually getting our ramps to the Saint-Antoine Save Easy parking lot on that Sunday afternoon in September of 1984. Our small wedge ramp wasn’t too big or heavy. We could easily transport it in my dad’s small wooden trailer. The distance from my parents’ house to the supermarket was about 1 to 2 kilometers. We loaded it up and my dad drove it to the show venue. That’s one thing with every single BMX Freestyle demo that we ever did. Our parents supported us by helping with what we weren’t able to do. Like ramp transportation before we had driving permits. Everything else was on us. From the beginning, the whole thing was our idea. We booked and set up all of our gigs. We went looking for sponsors. We were the ones driving the dream.
Our first set of ramps were overbuilt. The small wedge ramp was supported by an old pallet underneath additional support boards topped off with a sheet of plywood that stuck out on both sides. We had built it ourselves, in stages with whatever wood we could get our hands on. It flexed when you hopped on it which made it kind of sketchy, but it did the trick (pun intended). We learned how to do kick turns and rollbacks on that ramp. About 4 feet high, we had also launched it a few times. But never on pavement. Even on grass or dirt, the flat landing was brutally hard.
The quarter pipe was another beast altogether. Built the year before by my dad, my uncle and our neighbor, Paul Arsenault’s father. For plans, we followed a rough sketch in a BMX magazine. It weighed a ton. The first version didn’t come out as planned and had a rather bumpy transition leading into the top foot of straight vert. The plywood used was very thick and we had to cut grooves into the underside in order to get the wood to bend. This made the transition noticeably lumpy. After a few months, we fixed it by adding spaced boards and another layer of thinner plywood on top of the first in order to smooth out the transition up to the last few inches of vert. It worked much better for aerials, but like I said, it was a lot of wood and made the ramp very heavy.
My dad’s trailer was fine for the small ramp, but too small for the monster quarter pipe. But, what other choice did we have? We balanced it on top of the trailer laying on its back, the top and bottom sticking out on each side. It wasn’t the safest set-up, but we didn’t have to go far. It was also Sunday, so traffic was very light. My dad would drive really slow and my friends would follow on their bikes watching to make sure that our setup didn’t collapse. It wasn’t a great plan, but it was our only choice other than renting a big flatbed truck. I’m not sure why my father agreed to this? I guess he really didn’t want to disappoint us after putting in so much effort with all the other details.
We leave my parents’ house, turn left after the church. It’s taking forever. My dad is driving so very slow. Everything seems to be going to plan. Until, my dad suddenly starts losing his shit. The engine light on his Chevy S-10 is flashing. I’m sitting in the passenger seat. I don’t know what to say, so I don’t say anything. I’m pretty sure, actually I’m quite certain that we were above tow capacity. We stop to let the engine cool down and recover. The light turns off again after a bit. My dad is still very distressed. He tells me that he’s worried that he just wrecked something in the transmission of his truck. I’m sitting there silent with my head down. We can’t leave the ramp there, in the short side street beside the church. So after the break, my dad decides to hope for the best and to keep going. Stopping every minute to let the engine recover. In what seemed like an eternity, we finally make it to the Save Easy parking lot. We setup both ramps and the show happens as planned. All of our families and friends are there to support us. But deep down, I’m sure my dad is wondering how the hell we were going to get the quarter pipe back to our house now that the route back was mostly uphill...
Posted by Mike LeBlanc at 10:59 AM