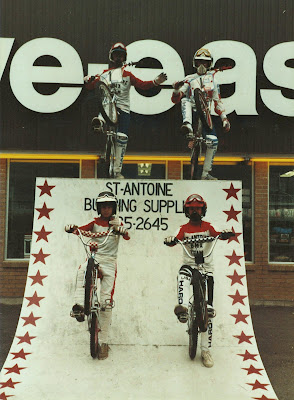 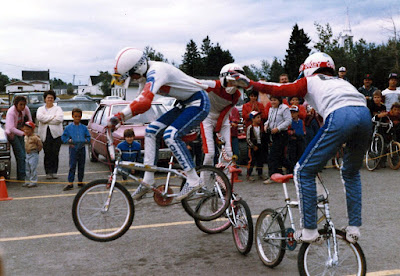 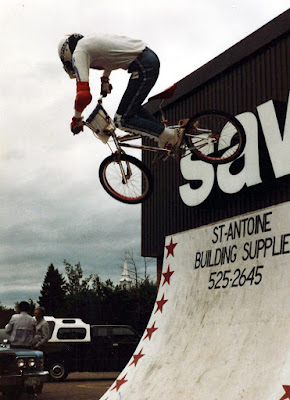 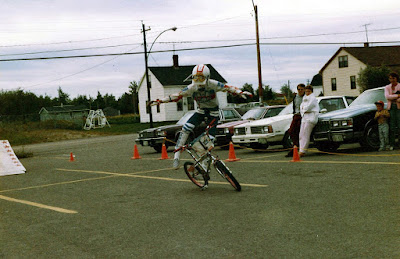 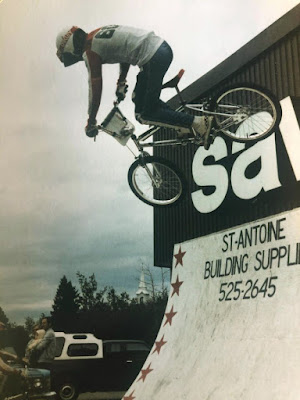 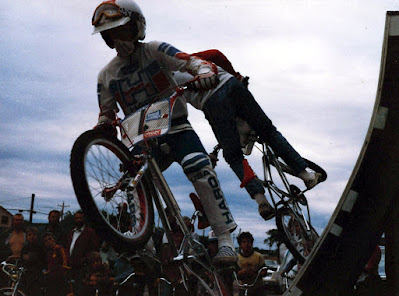 The whole BMX racing scene in our area died at the end of the summer in 1984.  We all had our reasons to be done with it, but the reality was that the fad that had started a few years before had simply run its course.  BMX freestyle on the other hand was booming.  Laid back.  No rules.  Complete freedom to ride how and where you wanted.  A liberty of sorts to flaunt your own style.  A fun and flashy two wheeled BMX revolution.  Race coverage was taking up less and less space in the BMX magazines.  This new trick riding trend was taking over at breakneck speed.  Our magazine heroes were RL Osborn and Mike Buff, the BMX Action trick team from California.  They spent their summers touring, traveling to perform shows, introducing the world to this new way of riding BMX bikes.  They were living the dream.  Our dream.

So very far from the epicenter of this new BMX movement, we also wanted to start our own trick team.  But how could a small bunch of kids living in a tiny Atlantic Canadian rural town like us make that happen?  We didn’t have any money.  We didn’t have our driver’s license.  After carefully contemplating our options, we approached the owner of our local supermarket asking for permission to use his parking lot.  He gave us the go ahead.  Now, all we needed to do was to plan our demonstration and hope that some people would show up to watch.  Luc seems to remember it as being part of the official opening of the new Saint-Antoine Save Easy.  My take is that we followed the BMX Action trick team’s lead and simply made hand written posters and put them up around town, kind of like posted signs announcing a yard sale.

The thing that we both remember for sure is that our very first demo was on a cloudy Sunday afternoon in September of 1984.  Back when stores were closed on the last day of each weekend.  I’m really not sure how many people came to see us because they saw our posters or even from word of mouth.  Save Easy was on Main street and I remember people driving by and simply stopping to see what was going on.  That and the fact that kids actually played outside in those days, naturally migrating to where others were gathered.  Add each of our families and we had a small audience worth performing for.  We were so pumped!

Luc, Paul Arsenault, the late Danny Cormier (RIP my friend) and I rode in that show.  We had practiced our routines and planned out the sequence of our tricks.  A local photographer showed up.  I’m not really sure how he knew about what we were doing.  These pictures were all purchased from him.  In the next year, Paul and Danny would slowly lose interest in BMX.  But for Luc and I, a seed had been planted.  We definitely wanted more of this.  We had become BMX freestyle artists...